China’s renewables cost to fall below coal power by 2026

As China moves towards a subsidy-free era for wind and solar projects beginning in 2021, the economics of renewable power have come into the spotlight. According to new research China provincial renewables competitiveness report 2019 from Wood Mackenzie Power and Renewables, the average levelised cost of electricity (LCOE) for solar and wind power is already cheaper than gas-fired power in China, and will be competitive with coal-fired power by 2026.

In 2019, new-build ultra-super critical coal plants are the key conventional low-cost power supply option with an LCOE of below US$50/MWh, while offshore wind is in the higher range, hitting US$116/MWh. Alex Whitworth, research director with Wood Mackenzie Power and Renewables, said: “Across most of China’s provinces and regions, a renewables cost premium remains over coal power, averaging 26% in 2019 for wind and solar, down from over 100% in 2010. 28 of 30 regions examined in our latest report see premiums of up to 70%, and only Shanghai and Qinghai have cost-competitive renewables today.” 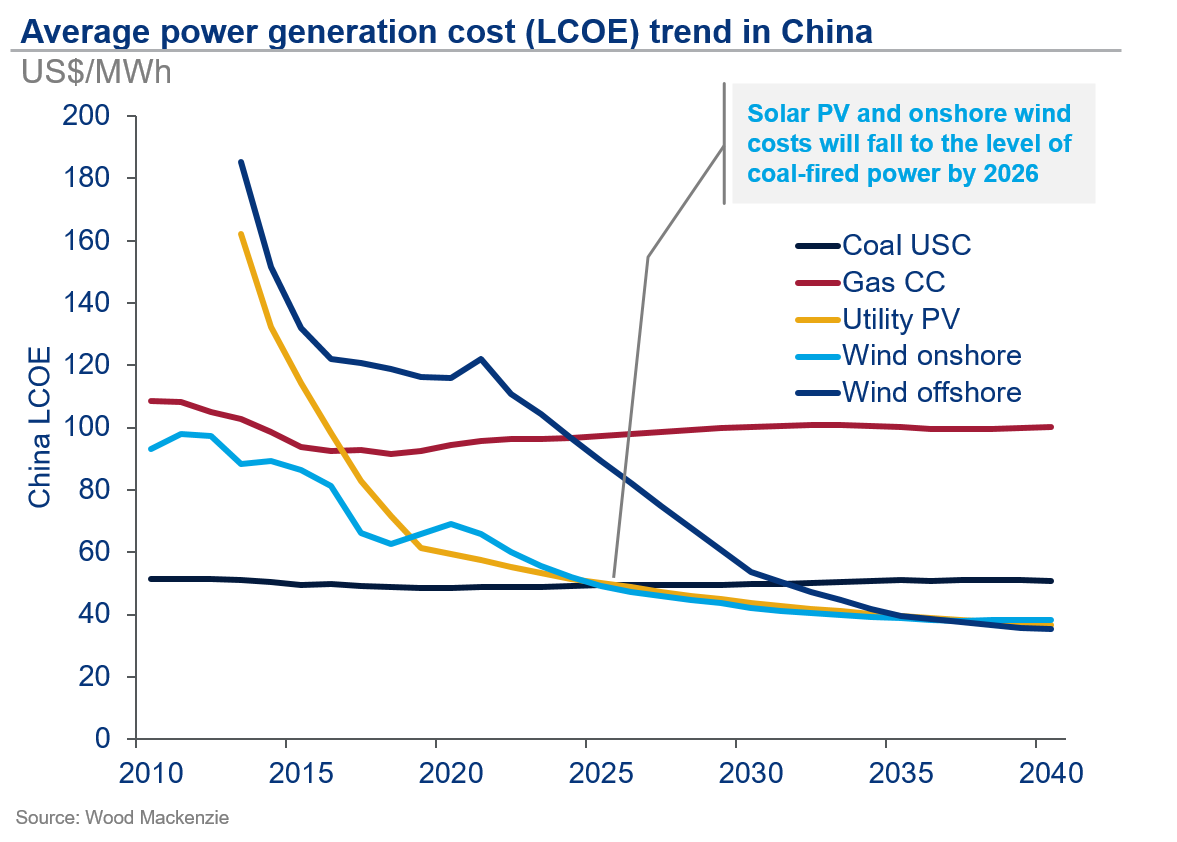 This year also marks the first time when solar PV costs have fallen below those of wind power, overturning the latter’s traditional cost advantage. Today, solar PV is cheaper than wind in 19 provinces, including Qinghai, Gansu, Ningxia and Shaanxi. “We’ve seen solar costs drop in China by nearly 40% in the past three years alone, slightly faster than the global average. Technology advancements, government support and expanded scale have contributed to rapidly falling costs,” added Whitworth.

Renewables competitiveness is achievable in the next few years for some of China’s regions, but for others, the journey will not be a sprint but a marathon – taking a decade or more. “Wealthier demand centres on the coast and in parts of central and northeast China will be first to see competitive renewables costs. But renewables investment in some areas of northern China, such as Xinjiang, will not be competitive with coal-fired generation, even by 2040,” commented Whitworth.

Challenges ahead in the subsidy-free era

Cost competitiveness is not the end of the story. Wind and solar power still only supplied 7.4% of the domestic power generation mix in 2018, compared with 83% from coal and hydro power. The share of renewables is increasing, but the recently announced renewables subsidy phaseout planned for the end of 2020 threatens the profitability of new investments in renewables in coming years.

Curtailment is also another key issue to deal with in China and creates uncertainty in LCOE modelling in the medium to long term. A 1% rise in curtailment typically increases the costs of wind or solar plants by 1.2%.

The costs of solar-plus-storage and offshore wind are expected to decline much faster than conventional fuels in the outlook. By 2040, solar-plus-storage costs will range between US$33-85/MWh due to declines in battery costs and economies of scale. “Offshore will be a key technology for increasing renewables penetration near coastal demand centres. Technology improvement, economies of scale and a high capacity factor are driving costs down. Annual cost declines of 6% will make offshore wind competitive with gas by about 2025 and coal by 2032,” added Whitworth.

To learn more about the report China provincial renewables competitiveness report 2019, download the brochure by filling out the form on the right column.