The Smart Grid in 2010: Market Segments, Applications and Industry Players

In this report and market taxonomy, we provide a comprehensive look at the drivers, characteristics, market segments, applications and the leading companies that are defining next-generation, intelligent power grids.

A confluence of concerns including national energy security, climate change and grid reliability has ushered in a period of rapid investment and increased political will to develop and deploy Smart Grid technologies around the globe. The race to be the solution provider for one of the multitude of challenges/opportunities - from advanced metering, demand response, the integration of distributed generation and storage, advanced utility control systems, and home/building area networks is speeding up, as major North American and European utilities now transition from the pilot stage to full-scale deployment mode. 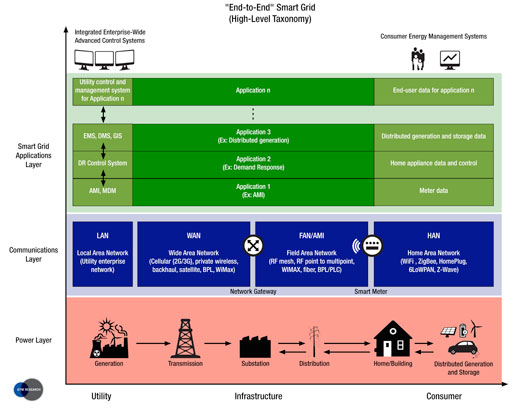 The electric power industry is in the early stages of a sea change. From the growing addition of intermittent, often distributed, renewable energy sources to new and efficient ways that residential, commercial and industrial users are consuming electricity, the underpinning grid infrastructure is transforming on an epic scale. The relatively static, slow-changing power transmission and distribution market is finding itself at the confluence of energy, telecommunications and information technology (IT) markets, driving necessary change and innovation in support of a 21st century intelligent utility network. A "Smart Grid."

The Smart Grid "market" has many moving parts. There are hundreds of vendors, large and small, providing software, hardware and solutions at every layer of the market, from the physical power infrastructure layer to the communications layer, up to the applications and services layer. Countless technologies are being developed, evaluated and deployed. Competing and complimentary system- and network-level standards are being defined. Power providers are planning and implementing varying systems architectures. Government policies are shaping the landscape at state and federal levels. Investments, private and public, are driving innovation at a scale large enough to match that of the problem itself. Consumer adoption for a new wave of energy services is unknown. Definitions as seemingly simple as what a Smart Grid is or should be are inconsistent and often debated. In a nutshell, it's overwhelming and often confusing.

This report serves to provide clarification of what the Smart Grid is, from end-to-end, and where it's going as the infrastructure is built out and the applications are ultimately defined
and delivered. It does so by providing a graphical taxonomy of the market; explaining the market drivers, benefits and challenges; walking through the many market segments and technologies; laying out the current and future applications; looking at some of North America's largest deployments to date; detailing venture capital investment in the space from 2005 through 2009; and identifying the major vendors, large and small, along with their products and services, throughout the Smart Grid supply chain.

GTM Research has interviewed over 50 vendors, utilities, industry alliances, R&D organizations and independent industry experts in constructing this report. The goal is to provide our own critical analysis of the market while at the same time incorporating a balanced view of the market, based on input from a wide-range of industry experts, all of who are working to solve specific problems throughout the emerging, end-to-end Smart Grid.

When large, established markets, such as the electric power industry, face transformation on such a massive and sweeping scale, a tremendous amount of challenges and opportunities are presented. The Smart Grid's allure, from financing to technology innovation to infrastructure deployment and ultimately customer demand, is driven by the timing of this transformation and the perfect storm of variables coming together to make it possible. With that said and although many industry zealots paint a picture of an electric power panacea, the reality is that the Smart Grid represents a very lengthy, methodical, evolutionary transformation and not a revolutionary change that will be realized overnight.

It's important to provide an understanding of the Smart Grid so insight of the ultimate vision and end goals can be gained. Beyond that, it's critical to understand that there are many inter-related submarkets, technologies and applications, all of which will evolve at different paces based on market demand and the availability of technology.

A Smart Grid transforms the way power is delivered, consumed and accounted for. Adding intelligence throughout the newly networked grid increases reliability and power quality; improves responsiveness; increases efficiency; handles current and future demand; potentially reduces costs for the provider and consumer; and provides the communication platform for new applications.

The revolution in information technologies that has transformed other high-tech industries (such as desktop computing, enterprise networking, wireless and wireline telecommunications) has yet to transform the electric power business, arguably one of the farthest-reaching and most extensive "networks" in existence. The Smart Grid, in large part, sits at the intersection of energy, IT and telecommunications markets.

Roughly $1.3 billion in venture capital was invested in the Smart Grid sector between 2005 and 2009 (through June 2009). Just over $105 million of that total went into the space through the first two quarters of 2009.

The most funded Smart Grid startup companies to date are those competing in the networking/communications space (solving the end-to-end communication challenge). As this market matures in the next two to five years, and industry giants, such as Cisco, grow their presence in this market sector, we expect the application space to be the next frontier of Smart Grid startup capital.

The Smart Grid is comprised of three high-level layers, from an architectural perspective: the physical power layer (transmission and distribution), the data transport and control layer (communications and control), and the applications layer (applications and services). Each of these high-level layers breaks down further into sub layers and more detailed market segments, all of which are detailed in the report.

This missing link in grid communications - the intelligent field area network (FAN) - is now for the first time being built-out, as a result of wide-scale AMI deployments that replace legacy mechanical meters with advanced digital meters, or "smart meters." The FAN will bridge the communications gap between the utility and the consumer. AMI can best be seen as a transformative application since the AMI/FAN communication network necessary to run advanced metering applications can also be used to transport data for all kinds of other emerging Smart Grid applications. The state of today's Smart Grid market is largely defined by AMI.

This report lists the top 15 AMI deployments currently planned in North America, providing information on the utilities and vendors involved in each of these utility-scale projects. The 15 projects alone represent roughly 41.1 million smart meters that are scheduled to be deployed by 2015.

The Electric Power Research Institute (EPRI) has estimated the cost of building a Smart Grid at $165 billion over the next two decades - which comes to approximately $8 billion per year.

Based on initial research, roughly 70 percent of executives at Smart Grid startups have backgrounds in wireless communications and/or IT hardware/software - a significant sign that many of the "smarts" in the Smart Grid are transitioning from different, related industries.

In June of 2009, The Department of Energy (DOE) issued its requirements for utilities and vendors wishing to apply for the $3.9 billion made available in Stimulus funds (from the (American Recovery and Reinvestment Act of 2009) related to Smart Grid projects.  As the bulk of these awards will be in the form of 50/50 matching grants, the resulting direct investment in Smart Grid over the next three-year period will be approximately $7 to $8 billion, and may very well exceed $10 billion - a major shot in the arm for this industry during an economic downturn.