What does the impending Fiat Chrysler Peugeot SA merger mean for the electric car market?

By Ram Chandrasekaran, Principal Analyst in Transportation and Mobility

Read on to discover:

Ram is the global lead for transportation and mobility, based in Houston.

Two of Europe’s biggest carmakers are set to merge, creating the world’s fourth largest automotive manufacturer. With traditional players such as Volkswagen (VW) committing to an electric-heavy future, and the headline-generating Tesla continuing to disrupt the industry, we’re looking at the impact of this development, and how the resulting business will approach the electric vehicle (EV) market.

Read on for some of the highlights from that research.

How will the Fiat Chrysler, PSA merger work?

The two organisations have agreed upon a 50-50 merger to become a new and as-yet unnamed entity. Between them, the manufacturers hold some of the most recognisable brands in motoring, from the titular Fiat and Chrysler to Jeep, Peugeot, Vauxhall, Citroen, and luxury brand Maserati.
When combined, the sales figures of the two carmakers will reach nearly 10 million per year, pushing the company firmly into the upper bracket of automotive companies. Current FCA Chairman of Board John Elkann will retain his position in the new organisation.

As of 2019 Fiat only had one fully battery powered vehicle, an electric version of the popular Fiat 500 model. Launched in 2003, the Fiat 500e doesn’t realise a very good value ratio, with a range limited to only 84 miles.

Despite the limited current offering, Fiat Chrysler has committed to an electric strategy with a plan to invest $10.5 billion in electrified vehicles over the five years. The company has announced a new EV-system which will be used in a range of vehicles, although most of these will be hybrids. The company is not planning an electric-only platform.

Things are a little more expansive on the PSA side of the merger. Until 2020 the only fully electric car produced by PSA was the Opel Ampera E, a smart hatchback with an impressive range of around 281 miles. However, 2020 sees the launch of another three EVs, the Peugeot 208e, DS 3 Crossback E-Tense, and the Citreon Cactus.

The future of their EV portfolio includes plans for seven 100% electric cars by 2021, including an electrified Corsa, and larger Peugeot model. They plan to have a matching number of plug-in hybrids on the same timescale. However, as with Fiat Chrysler, it’s important to note the organisation doesn’t have a specific battery-operated electric vehicle platform.

What does the merger mean for the EV market?

The merger of these two European dynasties will create one of the biggest players in global motoring, but when it comes to the electric car market, things are less clear. The 2020s are set to see a surge in EV buying, but as things stand, the newly merged company will only achieve modest penetration into that market. We project that just 3% of Peugeot sales will come from EVs.

The Fiat Chrysler and PSA merger will bring strong profits and a diverse manufacturing portfolio, but little pedigree in the EV market, and an electric-only strategy which lacks focus. There are many opportunities for the unnamed new company, but it will take some new developments for them to capture a significant slice of the burgeoning market. 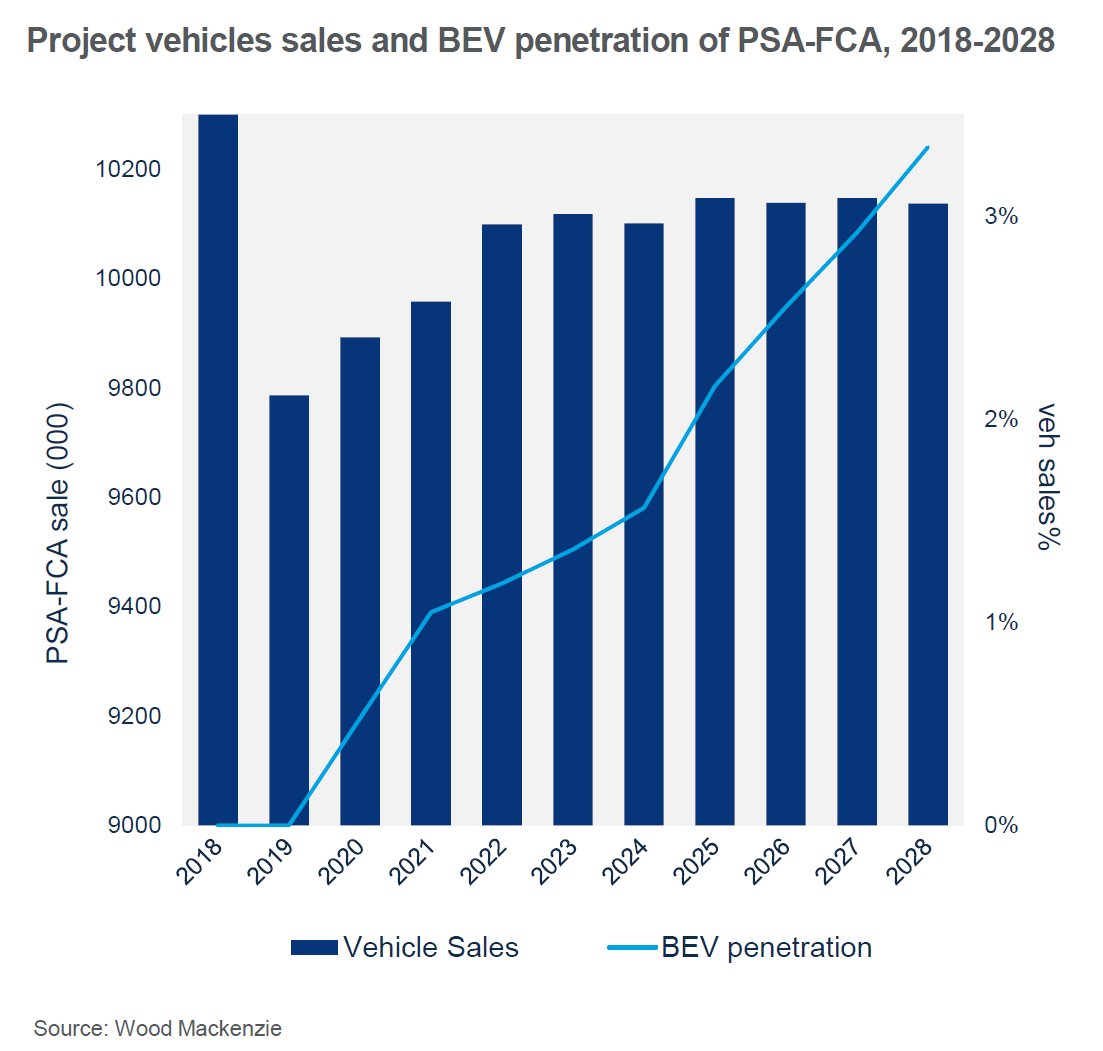 Where can I find out more?

Wood Mackenzie’s 21-page report on the Fiat Chrysler PSA merger takes an in-depth look at the portfolios of the two businesses, and analyses the outcome of their merger and its effect on the EV market.

This more in-depth investigation of the merger answers a range of questions, including:

This is part of our series of automaker profiles. Fill in the form on the page to download an executive summary.

Featured
Get ongoing research and data