At the launch of the spot energy market in 2016, prices ranged US $40-60/MWh across the main Sistema Interconectado Nacional (SIN) grid, but in the summer of 2017 and continuing into 2018, day-ahead prices have soared as gas pipeline construction delays have collided with declining domestic production to push oil-fired generation back into marginal duty, particularly during periods of high demand. 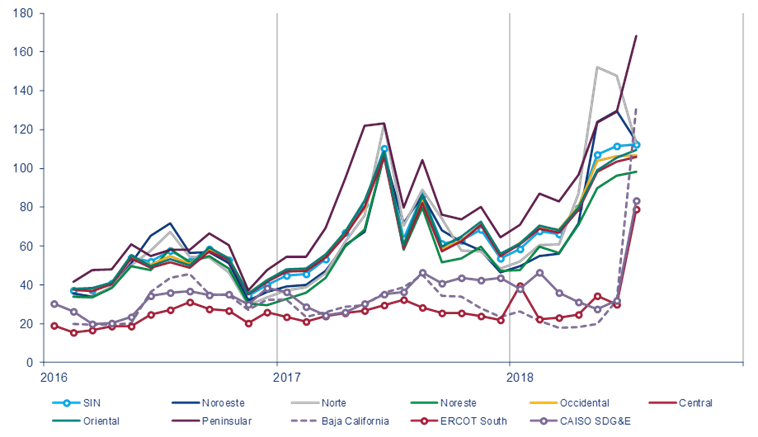 In related efforts, CFE (Comisión Federal de Electricidad) has raised the possibility of tolling agreements with US-based generators in which surplus US pipeline capacity could feed gas-fired generation in the US in order to wheel into Mexico via power transmission.

In this insight we discuss the prospects of interconnection between the US and Mexico along with ongoing plans to link Baja California to the Mexican SIN grid, with a focus on fundamentals and emerging transmission constraints.

Overall, we expect targeted cross-border ventures to continue, but the scale of the markets being interconnected, the current slate of existing and proposed projects, and inevitable public opposition, massive cross-border power flows appear several years away.

How much does the Mexican power market need US natural gas?