The momentum is clear, despite COVID-19 impacts in 2021

Cumulative distributed energy resource (DER) capacity in the United States will reach 387 gigawatts by 2025, according to our first-ever comprehensive DER outlook report.

The mix of DERs in the United States is diversifying as it grows. The DER mix evolving quickly away from nonresidential load management, which made up two-thirds of all new DER capacity in 2015 but will make up less than half by 2025.

The report also finds that total U.S. DER capacity will climb to an astonishing 387 gigawatts.

Cumulative DER investments in the U.S. will eclipse $110.4 billion between 2020 and 2025. Solar, EV infrastructure, battery storage and grid-interactive water heaters sales growth will drive spending to a new peak in 2025. 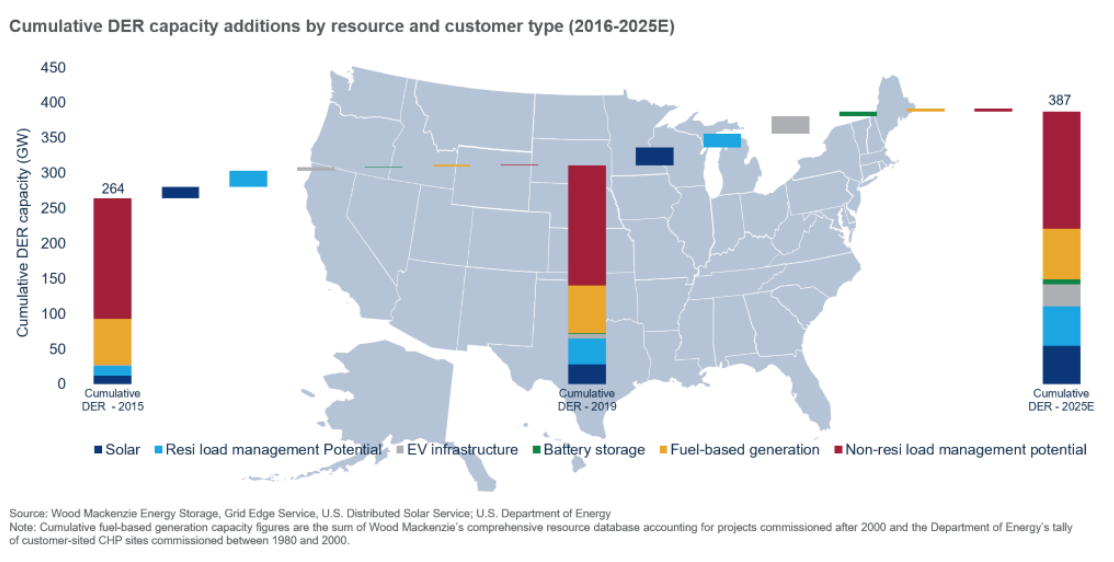 Hundreds of gigawatts of DER capacity in the balance

The report illuminates another important trend. The presence of DERs on the grid at far greater volumes than the demand response needs for reliability forecast by the North American Electric Reliability Corporation underscores the untapped potential for DERs to shape load and integrate renewables onto the grid.

According to the NERC, which regularly assesses the balance between supply and demand to ensure reliability, the need for demand response in North America will remain flat at around 35 gigawatts through 2025.

However, NERC’s assessment of demand response needs is based on a traditional approach to resource planning.

A new phase of grid planning is on the horizon in the U.S., though progress has been slow.

In September 2019, the Federal Energy Regulatory Commission concluded that it is interested in further exploring the interconnection of distribution-connected DERs, including load management opportunities.

FERC’s pending rulemaking on aggregated DERs will significantly impact how load management potential will be used to provide system flexibility, reliability and resiliency. In the meantime, these DERs will provide valuable services to customers by reducing load, demand peaks and exposure to dynamic rates, in addition to improving comfort and customer control.

Distributed energy resource capacity in the United States by 2025

The DER market is not insulated from COVID-19 impacts

The COVID-19 pandemic and coming recession will have a very significant impact across DER markets in the United States, with annual DER capacity additions falling by 61 percent in 2020.

2020 will be the first year the market doesn’t grow year-over-year in more than a decade, according to our new analysis. The U.S. DER market will experience a recovery in 2021 but will not exceed its pre-outbreak high until 2024.

What could accelerate or hinder DER growth in the U.S. over the next five years?

Fill in the form on the page to download a report brochure for the U.S. DER Outlook report. This Grid Edge report covers the full range of customer-sited distributed energy resources, providing a view of potential DER capacity from 2016-2025.