When will Tesla make a profit?

By Ram Chandrasekaran, Principal Analyst in Transportation and Mobility

Read on to discover:

Tesla competes in three primary markets – electric vehicles, solar PV, and stationary storage. To produce a comprehensive profile of Tesla, one of the most vertically integrated automotive manufacturers, we called on our analysts along the value chain from metals to renewable energy storage and battery raw materials.

Read on for some of the highlights from that research.

1. When will Tesla make a profit?

Let’s tackle the most frequently asked question first. Is Tesla making money? Despite strong revenue growth, Tesla has yet to make a profit. 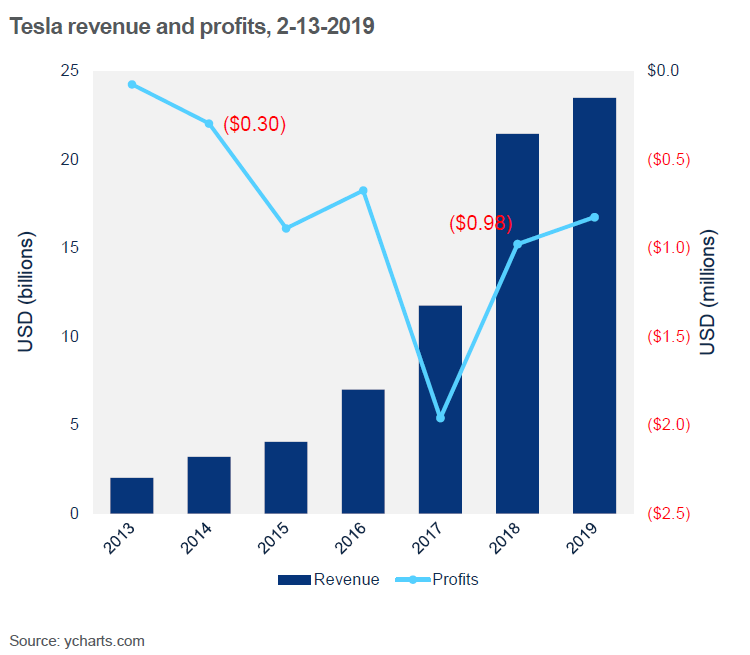 And yet, Tesla has delivered on its promises, if a little slower than promised. Making a profit wasn’t part of its master plans in 2006 or 2016. In 2006 the automotive manufacturer focused on reinvesting in the business in order to make increasingly more affordable electric cars. And in 2016, reinvestment went towards developing the self-driving capability, solar roofs and battery storage as well as broadening the portfolio.

Tesla is targeting market share rather than profits in the mid-term. In Q3 2019, Tesla CEO Elon Musk said he’d like to capture 1% of global automotive sales, but didn’t say when he expected to achieve that goal. If Tesla maintains its global BEV (battery electric vehicle) market share, it would reach this target by 2028. If it successfully launches an entry-level car, it could reach that target by 2024.

2. Will Tesla make a small car?

In interviews, Musk has said that Tesla could develop an entry-level car at a $25,000 price-point by 2022. Successfully launching such a product will increase its demand to 1.1 million cars a year by 2028, translating to 8 million BEVs in that timeframe.

There’s no indication if this vehicle will be smaller than the Model 3, which is considered a compact car in the US but mid-sized in Europe and China, or just with lower specifications. A smaller product may not perform as well in the US, but it could facilitate Tesla’s entry into the EU and China markets.

3. What Tesla models are available and which has the longest range?

4. Where are the Tesla factories?

Tesla has three operational plants, all in the US. The facility in Fremont, CA., manufactures cars while the plans in Reno, NV., and Buffalo, NY., manufacture battery packs and solar panels respectively. The addition of the China and Berlin plants should provide enough capacity to achieve long-term sales targets. When complete, Tesla will have a production capacity of 1.5 million cars per year.

To match its production capability, Tesla will need 26% of forecasted global battery production by 2028. In November 2019, Tesla announced a deal with CATL to provide packs for its Shanghai plant, complementing its non-exclusive deal with LG Chem. The deal with CATL is agreed upon in principle but has not yet been finalised.

Tesla is expected to use NMC811 packs in its China plants. The change in cell chemistry is not expected to have an effect on supply.

Panasonic was the sole battery provider at its Fremont and Reno facilities. However, disagreements over the Model 3 line with Panasonic lead Tesla to secure other sources of supply.

Where can I find out more about Tesla?

Wood Mackenzie’s 26-page Tesla profile looks at Tesla’s performance to date, its plans for the future and what factors could accelerate or constrain its growth.

It answers the questions above in more detail, as well as addressing the following:

This is part of our automaker profile series. To download a free executive summary of our report, fill out your info above.

Featured
Get ongoing research and data

Metals and mining: is caution the watchword for 2023?

Onshore wind: will profitability improve in 2023?

Asia can play its part on climate justice

Is gas the green choice?