Norway and Italy frontrunners, but UK falls behind in heat power decarbonisation

Europe is set to achieve 45 million cumulative heat pump installations in the residential sector by 2030, which will support the region’s net zero and energy security goals, according to Wood Mackenzie, a Verisk business (Nasdaq:VRSK) and its latest insight ‘Europe electrification of heat demand outlook to 2050’.

Heat pumps represent one of the most significant new demand segments in Europe’s power, with segment demand set to skyrocket 8-fold from 77 terra watt hours (TWh) in 2022 to 611 TWh by 2050.

“Financial support for property owners and structural incentives will bring life cycle costs of heat pumps below that of gas boilers. Regulatory action – such as bans on gas boilers in new build homes – would also support the switch. In addition, establishing energy policies for existing building stock, through the development of energy codes or other legislation, would accelerate the conversion to electricity,” Abdullah added.

The UK falls behind in heat power decarbonisation due to the construction methods used for existing housing stock. Drastic support to improve insulation and install suitable heat pumps is needed to reach the government goal of 600,000 annual installations by 2028, in line with the UK government’s ruling that gas boilers will be banned in all new home builds after 2025. 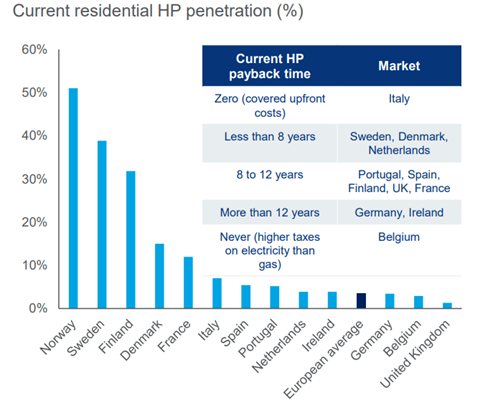 In comparison, Norway leads the way with early adoption triggered after the 1970s oil crisis. The country embraced heat pumps, fuelled by government subsidies, high fossil fuel taxes, low electricity prices and restrictions on oil boilers, which have been banned since 2020.

Italy presents the most ambitious support model. In May 2020 a ‘super bonus’ was announced, and later extended until the end of 2022, to pay homeowners 110% of costs to eco-proof their homes, such as insulating walls and installing a heat pump. Italy’s power price outlook remains the main hurdle to a booming heat pump market.

The displacement of natural gas heating with heat pumps also plays a crucial role in Europe cutting its dependency on Russian energy.

“Heat pumps play a crucial role in Europe’s path to reduced dependency on natural gas which accounts for 32% of the household final energy consumption,” Abdullah concluded.

This insight includes market-level views of the associated annual power demand arising from the growth in heat pumps in the residential and commercial sectors. Details on the modelling approach for forecasting hourly demand in our 12 hourly modelled markets is also included. The results of this analysis have been applied in our latest Q1 2022 European Power Service market outlook reports and soon-to-be published whole Europe region power markets 2022 outlook to 2050.

Electric vehicle sales are in the fast lane