Activity will be driven by off-grid green hydrogen projects, with Brazil and Colombia leading the way

Driven by the growth of off-grid green hydrogen projects, Latin America will see a sharp increase in offshore wind projects, with capacity reaching 34 Gigawatts (GW) by 2050, according to new analysis from Wood Mackenzie, a Verisk business (Nasdaq: VRSK).

Offshore wind activity will correspond to a 15.4% compound annual growth rate starting from 2032, when the first projects are expected to come online in the region. Leading the way will be Brazil and Colombia. 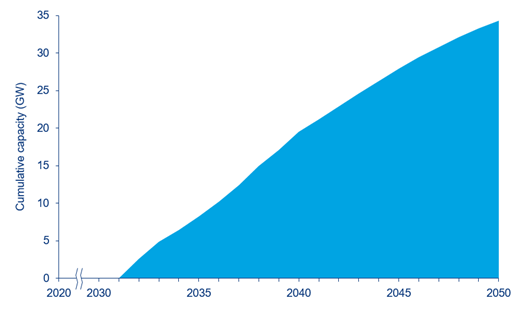 “We have seen significant regulatory movement in support of offshore wind developments, with Brazil and Colombia providing official roadmaps and guidelines for future activity,” said Kárys Prado, Research Analyst, Power & Renewables with Wood Mackenzie. “Both countries have an increasing number of planned projects, and this year’s announced pipeline growth in Latin America already represents a 34% share of global new project announcements, as of Q3 2022.”

The value for offshore wind capacity will be to support green hydrogen projects that look to play an important role in domestic energy use and exports. Wood Mackenzie forecasts that Brazil will capture close to 6% of the world’s total green hydrogen supply through 2050, with the market gaining scale after 2030. However, only 20% of the green hydrogen installations in the country will be grid-connected.

“The majority of these projects will be off-grid and part of it will be supported by offshore wind, alongside other renewables,” said Prado. “This will play a key role in the country’s future economy and long-term position as a global energy exporter. However, there is still much work to be done on the regulatory front and many challenges remain to make this a reality.”

“Despite all these challenges, there is an opportunity for the industry to take off. If regulation and infrastructure investments accelerate, combined with the fledgling green hydrogen industry, future offshore wind capacity could exceed expectations in the region,” concluded Prado.

The power of the PPA: corporate renewable procurement sets a new record in Asia Pacific