Electric vehicles can help save the environment, but can they save the owner money?

Ram is the global lead for transportation and mobility, based in Houston.

Several countries have put electric vehicle (EV) adoption at the heart of their plans to cut CO2 emissions. Norway is leading aggressive plans to phase out internal combustion engines (ICEs), as all new light vehicles, city buses and light-commercial vans must be zero-emission by 2025. At the same time, manufacturers such as Toyota and Ford are pushing for supply chains - including dealers, suppliers, and third-party logistics providers - to be carbon neutral by 2050.

However, the exact amount of CO2 reduction when switching to an EV depends on the miles travelled, size of the EV battery pack, the carbon intensity of the grid where the vehicle is charged, and mining emissions associated with battery raw materials.

Fighting climate change is one motivation for consumers to switch to EVs, but the more immediate instinct for switching is how cost competitive EVs are compared with ICE vehicles. Understanding the total costs involved in buying and running a car over the period of ownership is an important part of choosing which vehicle to buy, especially when considering the move to an EV.

Using Wood Mackenzie's Total Cost of Ownership (TCOO) Model, which allows users to compare the potential cost of owning an EV against an ICE vehicle over 10 years, it's clear that three variables - incentives, fuel cost and depreciation - really make the difference.

The provision of incentives has been one of the primary levers that has made EVs affordable and increased their penetration. However, policies are always changing and have their limitations.

Using our model, if we take the cost of ownership of a gasoline Sedan in Europe in 2022, the car is almost US$7,000 (€5,900) cheaper than its EV counterpart when incentives are not applied. The gap not only closes when we consider incentives, but the average cost of an electric Sedan in the first two years is similar to that of a gasoline Sedan. This is a crucial factor for people considering a short-term buy.

While incentives will be phased out and EVs must be profitable without them to scale, our analysis highlights the importance of incentives to make EVs lucrative in the near term.

Another lever tied to policy and global supply-demand dynamics is fuel cost.

According to Wood Mackenzie’s base case view, electricity prices are expected to grow marginally until 2040, whereas gasoline and diesel prices will rise steeply alongside oil prices. As such, we expect the critical point in the US - when the 10-year cost of ownership of EVs without incentives becomes cheaper than ICE vehicles - to be around 2025 or 2026. Additionally, the annual fuel cost savings for EV buyers will reach as high as US$1,000 by 2030. In this base case outlook, gasoline prices in the US increase to US$4.70 a gallon by 2040.

However, when we change the gasoline price to a flat US$2.50 a gallon, comparisons shift quite drastically. ICE vehicles remain a better buy for most of the decade, with EVs narrowly surpassing them by 2028. While a flat US$2.50 a gallon price outlook is unlikely, technology innovations and lower demand could keep hydrocarbon prices lower for longer as evidenced by the trends seen over the past five years. 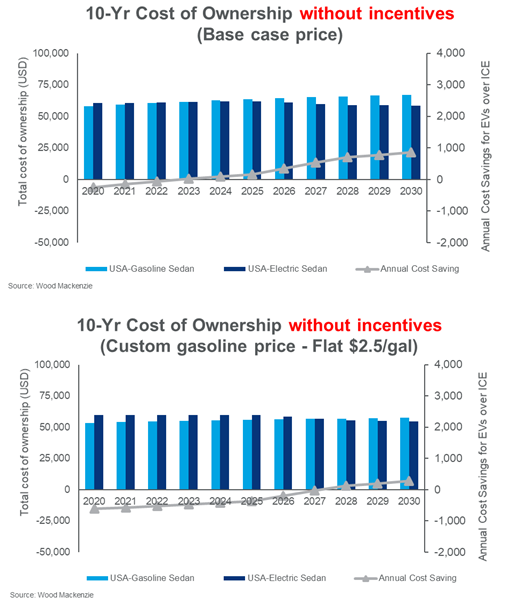 It is difficult to ascertain an accurate depreciation rate for EVs bought today due to a small sample size. Certain models, such as those from Tesla, appear to hold their value well, whereas other EVs depreciate much faster than ICE vehicles.

As the quality of non-Tesla EVs improves and there is wider mainstream adoption of these vehicles, depreciation levels are likely to become comparable. However, as ICE vehicles begin to phase out in these regions, the reverse is likely to happen. Some ICE models will increase in resale value due to their cult status and desirability, while others will depreciate much faster.

In a scenario where both gasoline vehicles and EVs face a similar depreciation rate of 65% over 10 years, we see that US gasoline and electric SUVs have comparable 10-year ownership costs in 2028 over an average of 15,000 annual miles.

Electric vehicle cost of ownership is likely to be cheaper

According to our analysis, the total cost of ownership of an EV is likely to be cheaper than that of its ICE counterpart. However, it’s worth noting that only 10% of consumers will rely on cost as their basis for a purchasing decision. Fewer still will have an accurate projection of retail gasoline and electricity prices to make the right choice.

Local taxes are a significant part of gasoline prices. Without a drastic change to retail gasoline prices in the near term, the total cost of ownership can only move EV adoption to the next step. To address the wider market, EVs will must have a broader appeal, a larger existing customer base, a higher penetration of public charging stations and a more accessible purchase price.

Get our electric vehicles guide

The coming US low-carbon energy boom