North-west Europe needs more regasification capacity – both to meet the region’s growing demand, and to soak up surplus volumes of liquefied natural gas (LNG) in the future.

Over the last 12 months, LNG import levels into Europe have risen steeply, driven by a global glut of LNG. We estimate LNG imports for 2019 will reach 82.5 million tonnes, up 34 million tonnes year-on-year.

This has primarily been driven by a major ramp-up in new liquefaction capacity and limited Asian demand growth, resulting in supply outstripping demand globally and LNG prices falling.

“European terminals, particularly those in the north-west, have handled large volumes of LNG this year. This is because the north-west European market is a liquid one, and there is enough demand to soak up the surplus spot cargoes. However, this has pushed a number of European regas terminals to the limit,” he said, pointing to data which shows that daily nameplate sendout capacity has occasionally been reached in terminals such as Zeebrugge.

Utilisation will remain high over the next two years before dipping from 2022 as the global LNG market tightens. Imports – and utilisation levels – will rise again beyond 2024. Europe’s long-term LNG demand will be sustained by the region’s growing gas import dependency, driven by declining indigenous production, the retirement of coal and nuclear power generation and a lack of alternative gas supply.

However, Coogan said there are growing concerns about whether the region’s regasification capacity will be sufficient. “There is another LNG glut expected in the mid-2020s, during which north-west Europe will once again act as a sink for surplus global LNG volumes.

“We expect sub-annual peaks in utilisation to become higher and more frequent. This will be underpinned not just by external supply factors, but LNG’s increasing – and increasingly volatile – contribution to Europe’s energy mix, against a backdrop of a growing share of intermittent renewables and a progressively more liquid LNG market,” he said.

He added that with current levels of send-out close to capacity, this will create supply bottlenecks.

“With no new developments, we expect monthly utilisation to start exceeding available capacity in Northwest Europe by 2025. We do not believe current regas capacity is sufficient to deal with these future volumes.” 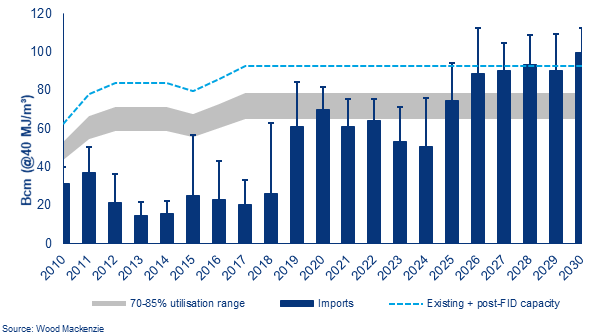 While there are a number of proposals for new terminals on the drawing board in this region, none of these has yet reached FID.

Coogan said: “Time is running out. The lead time on a new project can be five or more years, which means if FIDs aren’t taken in the next year or so, the extra capacity required may not be in place before the next LNG glut.

“If more capacity is not constructed soon, LNG imports will be limited by physical constraints and north-west Europe will struggle to soak up the global surplus.”

He added: “Long-term confidence in future LNG demand in Europe will need to result in long-term regas capacity bookings at proposed terminals for FIDs on to be made.

“There have not yet been any concrete bookings for regas capacity at any of the proposed north-west European terminals, although Exxon Mobil and Qatar Petroleum have expressed interest in taking capacity at the proposed Wilhelmshaven terminal in Germany.

Is 2019 the year of the much-talked-about LNG oversupply?