How the U.S. solar industry will weather the ITC phasedown

Utility solar is competitive with new gas plants across the U.S., and will increasingly be the lowest-cost option in key states for wind energy.

The price of solar has come down so dramatically in the past few years that it is now competing with and beating generation sources across the board.

“Despite the fact that we’re now in a world where there are tariffs in place on solar modules, and the Investment Tax Credit that helped bolster the industry in its early days is now stepping down, the future actually looks quite bright,” said Wood Mackenzie Power & Renewables Senior Analyst Colin Smith on a webinar this week (available to watch for free here).

Smith noted that renewables made up 50% of new electric generating capacity additions between 2014 and 2017. While 2018 saw a resurgence in natural gas due to a handful of large combined-cycle plants coming online, renewables will soon again dominate new capacity additions, led in large part by utility solar.

“By 2017-2018, we actually began to see utility PV consistently beat out new-build natural gas in pretty much every territory,” said Smith. He notes that power-purchase agreement (PPA) prices are consistently in the mid-$30/MWh range in many markets, and as low as $22/MWh on a levelized basis in some states.

These PPA price declines can be attributed in large part to falling module costs, still the largest cost category in the system supply stack. Smith notes that the last few quarters have seen a state of oversupply in the global module market, leading to lower prices. As the market adjusts to the current demand, Wood Mackenzie expects prices to stabilize on a slow downward trajectory through 2024.

Even if module prices stay flat over the next few years, Wood Mackenzie expects that overall system prices will still decline due to improvements and savings across the system stack and supply chain.

According to Smith, wind and solar prices are converging. Both are competitive with combined-cycle natural gas and coal on a levelized cost of energy (LCOE) basis, but solar is now beating wind on price in a few U.S. states. Smith notes that “after the stepdown of the wind Production Tax Credit, utility solar will beat onshore wind on an LCOE basis in five of the top 15 [wind] markets." 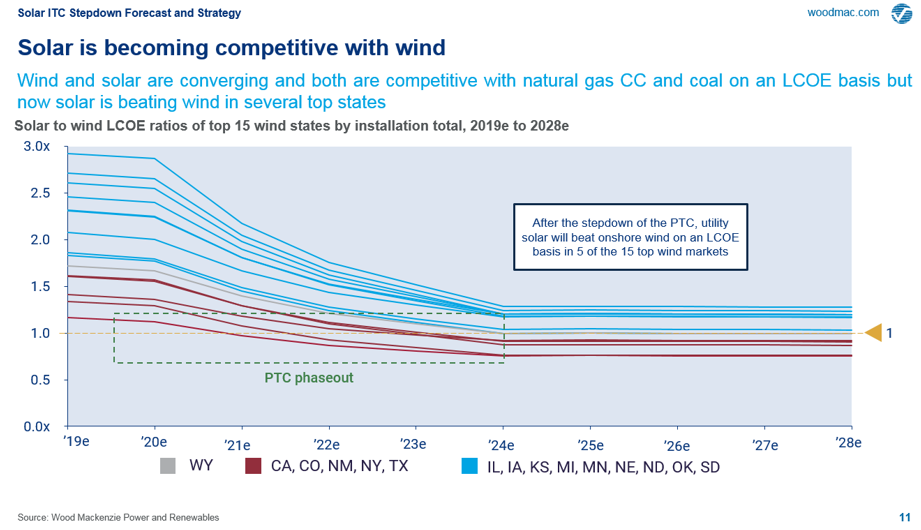 “We’re now moving into a world where utility solar becomes the No. 1 competitor to onshore wind,” added Smith.

The analysts at Wood Mackenzie reported that 3.2 gigawatts' worth of new solar projects were announced in 2018, and the utility PV pipeline peaked at over 25 gigawatts.

So where is this demand coming from? 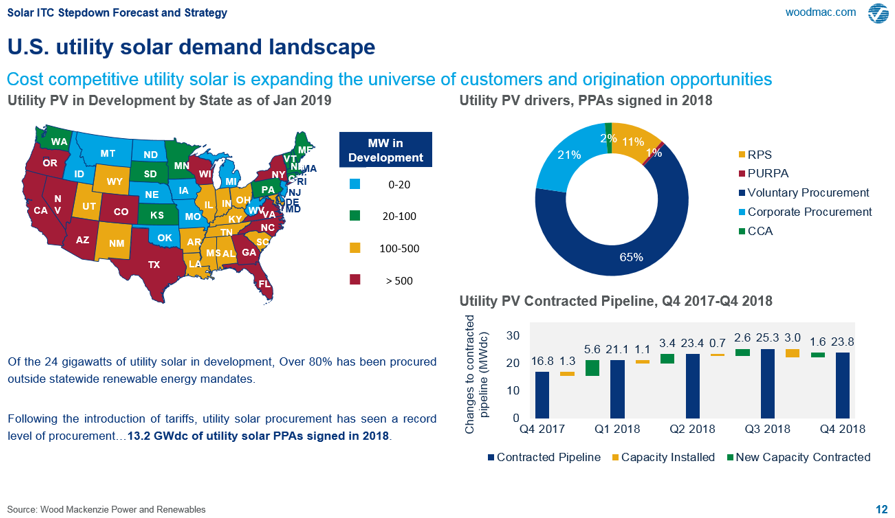 Demand is not confined to a few U.S. states, either. According to WoodMac’s project database, there are now 11 U.S. states with at least a half-gigawatt of PV in development, and half of all U.S. states have more than 100 megawatts in development.

Wood Mackenzie expects the U.S. utility solar market to grow 26 percent in 2019, reaching nearly 7.8 gigawatts. The bulk of projects in the pipeline are targeting completion in 2021, before the ITC steps down from 22 percent to 10 percent. WoodMac forecasts 10.4 gigawatts that year, which is a few hundred megawatts shy of the record-breaking 2016 total. 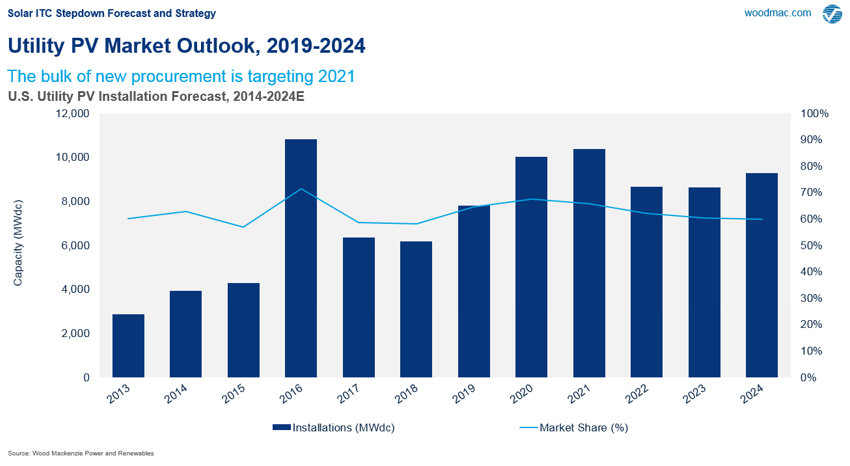 Register to watch the webinar on demand here to learn more about commence-construction qualifications, advanced procurement strategies and the coming tightness in the global module market.

Understand the factors shaping the nation's largest solar segment and steer your organisation towards the biggest opportunities.

Understand the factors shaping US residential and commercial solar markets and steer your organisation towards the biggest opportunities.

Encompassing the full extent of solar balance of systems technologies, costs and vendors, get the most up-to-date read on technology, component pricing, system cost breakdowns, vendors, and system operators.

Solar ITC Stepdown Forecast and Strategy: The Path Forward for Supply and Demand

With the investment tax credit step down beginning in 2020, utility-scale solar developers in the U.S. have begun to solidify their strategy on how to take advantage of the maximum amount of the ITC possible.