With six projects in development or planning phases, operators look to re-establish GoM as innovation hub

As the US looks for innovative ways to reduce greenhouse gas emissions, offshore carbon capture storage (CCS) projects in the US Gulf of Mexico (GoM) could play an influential role in meeting future goals, according to analysis from Wood Mackenzie.

There are currently 22 CCS projects in the US, which accounts for 19% of global activity. Wood Mackenzie’s report ‘US GoM decarbonisation: a basin with nine lives, is CCS a tenth?” surmises that GoM is emerging as a new hub of activity, with six projects in the development or planning phase. 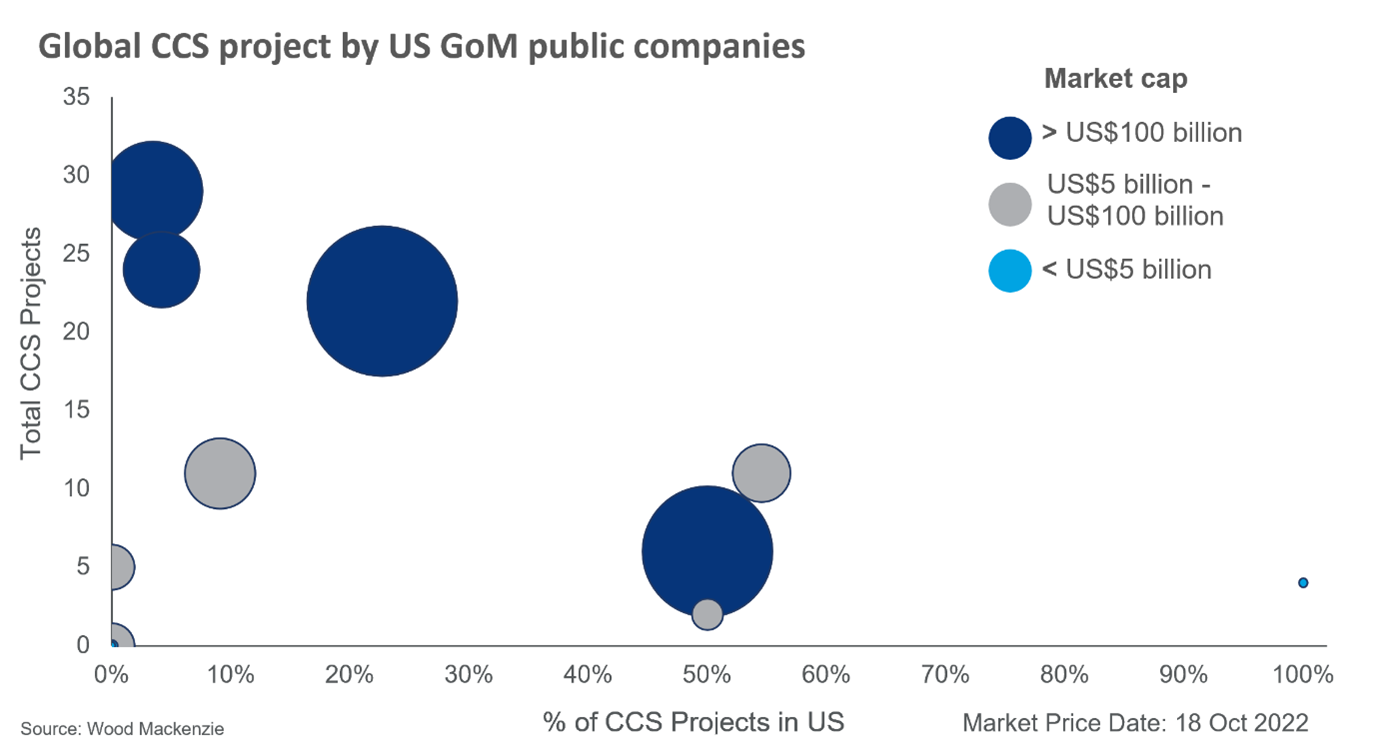 Texas and Louisiana combined for close to 500 million tCO2e of emissions in 2021, 20% of the US total emissions. With the US targeting greenhouse gas emission reductions of 50% from 2005 levels by 2030, these new CCS projects could play an important role. However, many challenges remain to make these successful.

“The US Gulf of Mexico has long been a technology pioneer for the global upstream industry,” said Kim Dowdell, upstream research analyst at Wood Mackenzie. “As the basin matures, a thriving offshore CCS market could be the next step that keeps this region relevant and at the forefront of innovation. Offshore CCS is still in early stages. There are only three projects in operation across the globe, two in the North Sea and one in South America. The GoM can position itself as the frontrunner for successful offshore CCS projects.”

The report goes on to say initial projects won’t target upstream emissions. Instead, projects will target emissions from the Gulf Coast’s large industrial sector, which includes refining, petrochemicals, gas liquefaction, cement, power generation, and much more. Emissions from these operations would be piped to former rigs retrofitted for sequestering. CO2 can then be safely injected into saline aquifers or depleted oil and gas reservoirs.

“Those long-term emissions are better suited for CCS,” said Dowdell. “The GoM players won’t be contributing the initial CO2. Instead, they will bring their expertise, project management skills, and reservoir knowledge to the table.”

Dowdell added: “We are seeing momentum build on all fronts, with investments from both major and independent companies in this activity. This region has historically been an innovator in the upstream industry and now it has the chance once again to push boundaries, and be a leader in offshore CCS technology. As energy sources continue to shift, this will be an important way for the gulf region to play a crucial role in the energy transition and remain relevant for decades to come.”

Itaipu is a pre-salt oil field located in the northern Campos basin. The field lies within the BM-C-32 licence and has not been declared commercial. On November 2020, Prio (former PetroRio) took over operatorship of the field from BP and on September 2022 it acquired all TotalEnergies' share. The new operator hasn't released the reserves certification yet nor the development concept for the field yet. We currently consider Itaipu resources as contingent. Itaipu is located just ...

US GoM decarbonisation: a basin with nine lives, is CCS a tenth?

Carbon capture and storage (CCS) will be instrumental to help the US reach its greenhouse gas emission reduction targets. The Gulf Coast and US GoM regions which are no stranger to reinvention will be influential to reach this target. There are multiple sources of carbon emissions and corporations are gearing up for the challenge. Companies like Chevron, ExxonMobil, and Talos Energy are stepping up as the early innovators in GoM CCS. Now, can they execute in time? Our analysis focuses on a few of the many technical and regulatory components that will need to be sorted before the US GoM can become the next large-scale sequestration hub.

Who will be crowned winner in the 20-ksi GoM challenge?

For over a decade now, operators in the US Gulf of Mexico have been in pursuit of equipment and technology suitable for the safe development of ultra-high-pressure reservoirs; those requiring up to 20,000 psi operating pressures. The Kaskida discovery was the first in this category, discovered by BP in May 2006 and is understood to have logged pressures as high as 30,000 psi. Over the next eight years, we count at least as many more ultra-high-pressure discoveries with estimated total recoverable reserves to be nearly 2.4 billion barrels equivalent.

Floating rig rates on the upswing as available supply shrinks

Operators are facing increasingly tighter rig supply while rig rates creep upwards. Rig contractors are riding the momentum of improved margins and backlogs. With pricing power tipping to suppliers, urgency will propel operators to make tough decisions to secure a rig. Read on to learn: • What rig contractors are focused on near-term • Where future potential drilling activity could further strain rig supply • The challenges operators will continue to contend with