The pipeline for energy storage projects in the U.S. has doubled this year, ballooning to 32.9 gigawatts, according to the latest U.S. Energy Storage Monitor from Wood Mackenzie Power & Renewables and the Energy Storage Association (ESA). While not all of the projects will come to fruition, this is a clear signpost that developers are bullish on energy storage. 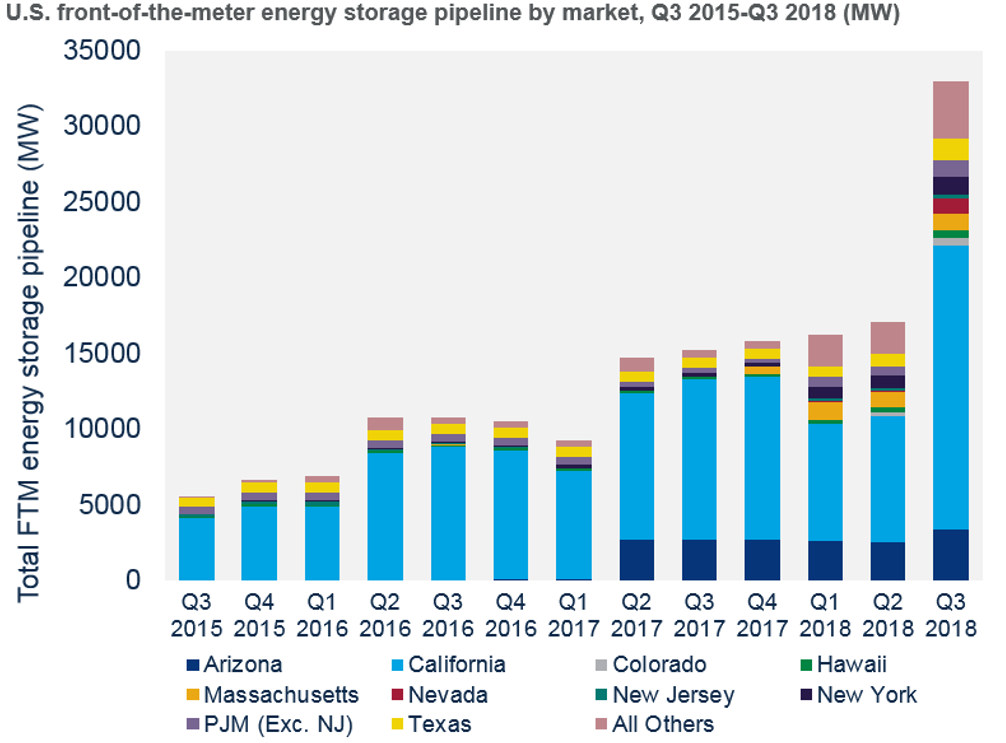 “Just over a year has passed since ESA, on behalf of our members, announced the industry vision of deploying 35 GW of new energy storage by 2025,” said Kelly Speakes-Backman, CEO of ESA. “With today’s recognition of the nearly 33 GW pipeline of U.S. storage projects, we have proof of the industry’s commitment to realizing our collective vision, which is projected to bring with it the creation of more than 167,000 new jobs, reduced emissions, and $4 billion in cumulative operational cost savings, among other benefits.”

California continues to lead in total pipeline; however, the report points to surging interest across a variety of new state markets including Missouri, Mississippi, Nebraska, and Oklahoma.

“Developers in markets across the entire country are seeing the raw economic potential that energy storage can provide, and they’re trying to get their foot in the door in key interconnection territories prior to FERC Order 841 mandated changes going into effect,” said Dan Finn-Foley, senior energy storage analyst with Wood Mackenzie. “Outside of the raw megawatt numbers, 2018 saw proposed projects or utility investment from Alabama to the Dakotas, from the Carolinas to Nevada, and everywhere in between. With everything energy storage can do there really is no U.S. market that isn’t emerging as an opportunity.”

The U.S. Energy Storage Monitor tracks quarterly deployments in the U.S. across all segments. The latest report shows that front-of-meter energy storage deployments were down 14 percent year-over-year when measured in megawatts, yet up 178 percent year-over-year in megawatt-hours. The report notes that more long-duration projects are coming online for services such as capacity and load-shifting. In quarters and years past, the U.S. has seen more frequency regulation projects which generally have less than 1-hour discharge durations.

The report’s free executive summary is available to download here.