A three-round licensing bonanza for Brazil’s pre-salt acreage is less than two months away. The final round, PSC (production sharing contracts) Round 6, features four blocks in the Santos and one block in the Campos basins. Timing is planned for 7 November, 2019.

This is part three in a series of previews on the upcoming rounds. We previewed Concession Round 16 in part one, and the massive DRO on offer in part two. We expect some of the most intense competition to come in Round 6 for Aram acreage, which holds the second-highest PSC signing bonus ever required in the country at US$1.3 billion with a 24.53% minimum profit share. 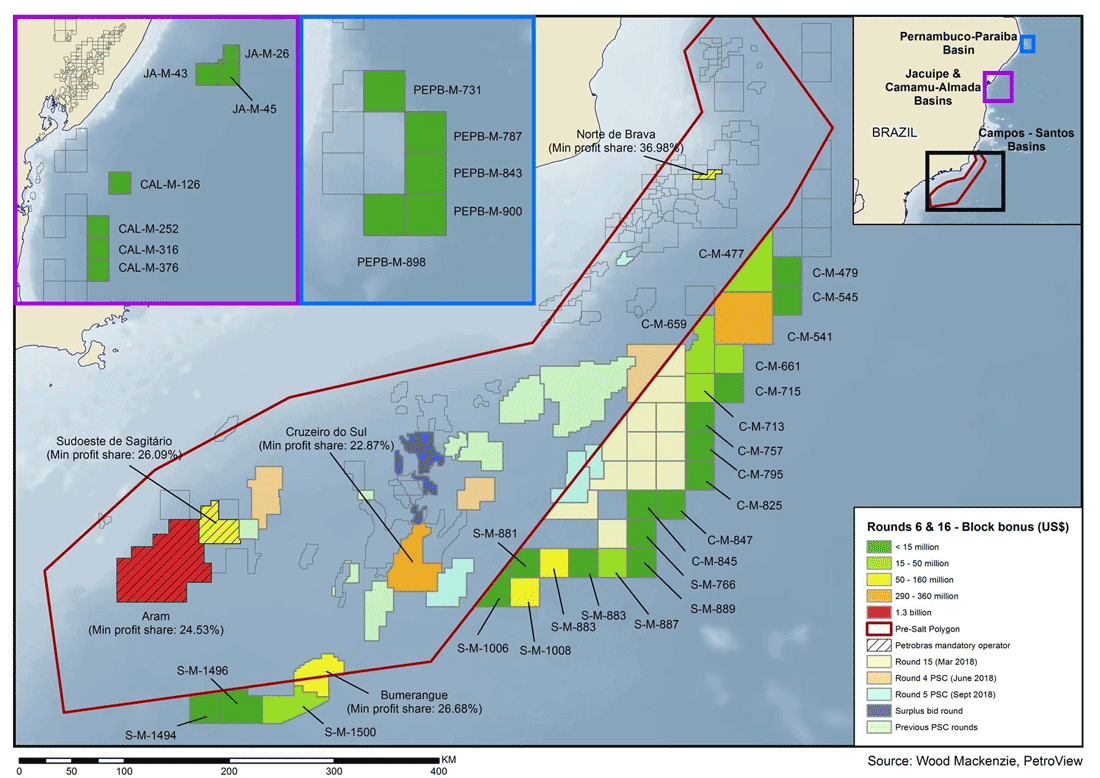 Here’s a preview of the five blocks on offer – Petrobras has already required operatorship with 30% participation of Aram, Sudoeste de Sagitário and Norte de Brava. That means Petrobras will be entitled to a minimum US$0.5 billion in signature bonuses for these blocks.

For more Brazil bid round coverage, fill in the form on this page to receive a complimentary report, and stay tuned for news on an upcoming webinar.

Conflicting ambitions will shape the upstream fiscal landscape in 2023

Brazil's pre-salt is one of the most relevant deepwater plays with a huge resource base and impressive well productivity. We include links to all of our upstream coverage of the play, such as: Insight - The new pre-salt map after the 2017 and 2018 bid rounds: all eyes on Brazil's Santos basin Upstream asset report - Libra: Estimated recoverable volumes of 3.3 billion barrels of oil are expected in the northwestern portion (Mero) of the discovery. The large-scale resource offered by Libra will provide a long-life production stream

The Malaysia-Thailand Joint Development Area (MTJDA) was formed in 1979 when the Malaysian and Thai governments agreed to cooperate on the exploration and exploitation of hydrocarbons in an area of continental shelf subject to overlapping claims in the Gulf of Thailand. Following the initial 1979 Memorandum of Understanding, and subsequent award of the first Production Sharing Contracts (PSCs) in 1994, exploration in the MTJDA has led to several significant gas discoveries, including the ...