Europe’s solar renaissance is on the horizon

European solar installations hit a five-year high in 2018, and the annual market should crack 20 gigawatts by 2021.

Discuss your challenges with our Power & Renewables experts

Europe's solar market is undergoing a resurgence. More than 10 gigawatts were installed in 2018 for the first time in five years, and the market should break through the 20-gigawatt barrier by 2021, according to our latest research.

Countries are rushing to meet their 2020 climate-energy obligations, while targets for 2030 are currently under review. 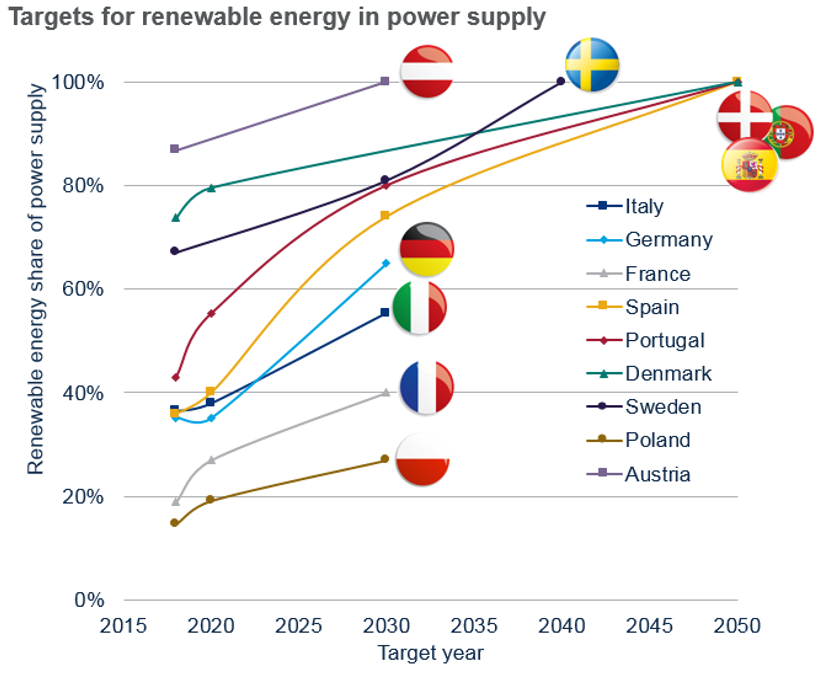 During this time frame, European power markets will see deep levels of decarbonisation, with solar PV playing a key role. Several countries have ambitious goals for solar: the Italian government is targeting 50 gigawatts by 2030, and France has a 20 gigawatt target for 2023.

Auctions for utility-scale projects and feed-in tariffs (FITs) for distributed generation (DG) solar remain the two primary drivers of solar installations in Europe. In France and Germany particularly, auctions will deliver large volumes of capacity — between them almost 19 gigawatts is due to be procured between 2019 and 2024. Italy is also due to launch joint onshore wind-solar auctions in 2019, though final European Commission sign-off of the associated legislation is still required.

Outside of auction programmes, subsidy-free deployment in Europe continues to gather pace.

Spain has a pipeline of almost 10 gigawatts of subsidy-free projects under development, on top of the 3.9 gigawatts of projects awarded during 2017's auctions which should be delivered in 2019. Most developers are looking for corporate or utility power-purchase agreements (PPAs), while some are going down the merchant route. Other subsidy-free projects are under development in the UK, Italy, Portugal, Germany and Denmark.

A post-subsidy market for solar in Europe is starting to take shape. There are mixed signals for the DG solar market, however.

Germany continues to deliver large volumes of FIT-backed DG solar each month, though a 52-gigawatt cap for the FIT program is looming — we think it'll be hit in 2022.

In the UK, the FIT has just closed to new participants, with no clarity over future tariffs for power exported to the grid. All signs point towards a greater role for storage-paired PV systems in Europe over the next few years. As FIT payments become less generous (or are taken away entirely), higher rates of self consumption will look ever more attractive.

In 2019, Wood Mackenzie estimates that on average, all-in costs for a utility-scale system will be less than $1.00/Wdc with an average of all-in cost of $0.87/Wdc in all major European markets. Switzerland and Belgium remain the most expensive utility-scale markets due to land-acquisition costs and above-average hourly wages. 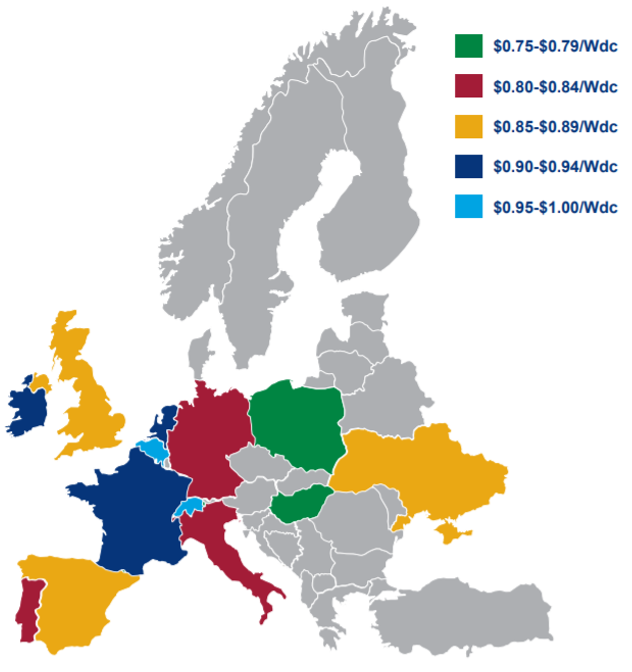 Although Spain saw one of the lowest all-in costs of any European country, the influx of projects has created an overwhelming demand for developers and EPCs, which has led to bottlenecks. As a result, the market has experienced stagnation in cost decline. From 2018 to 2019, Spain is expected to see an average decline of 1 percent all-in costs versus the rest of Europe, which will see on average a 9 percent drop. As more EPCs and developers enter the market, these bottlenecks will be resolve.

On May 15-17, Wood Mackenzie is exhibiting at Intersolar Europe at Booth C4.516.