European BOPET film prices have risen nearly 17% over the last 12 months, levels not seen since late 2011. European producers have implemented several price increases throughout the year. They reference tight supply, healthy demand and rising raw material costs as the primary drivers for the upward pressure on BOPET film prices in 2018. Will prices rise even further in 2019?

Below are the key issues to focus on for the films and flexibles industry over the next 12 months.

1.Will raw material costs rebound in the first quarter?

The cost of BOPET film raw materials (PTA and MEG) saw a spike in September but has since eased, with the expectation that PTA would fall again as we approached year-end. Film producers are naturally reluctant to see any fall in BOPET film price. They've been keen to point out that, although raw material costs are currently coming down, they are still higher than they were a year ago.

Raw material costs are expected to stabilise as we go into 2019. If BOPET film producers can keep the film price stable over the short-term, this will put them in a strong position should raw material costs start to move upwards next year. 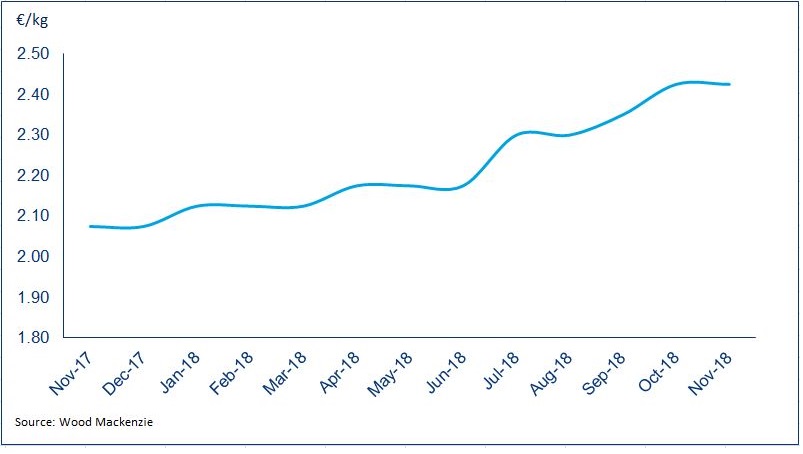 Looking for a detailed analysis of the world BOPET film industry?

2. The move towards formula-based contract pricing

Because of the continued volatility around BOPET film price, European converters are adopting a formula-base price contract, wanting agreements based on average resin and conversion costs over the previous three-month period. Given average resin prices have risen in Q4 2018, we could see an upward movement in formula-based contracts derived in Q1 next year.

The European market has seen healthy demand throughout the year, with film producers reporting lead times out at 4-6 weeks for domestic product.

This has been reflected in the global market, which has come much more into balance over 2018, impacting offshore sourcing for European buyers. The region sources roughly a third of its needs offshore, with buyers reporting offshore lead times having been extended by six weeks.

With European demand expected to remain healthy going into 2019 and if lead times remain at current levels, film producers will remain confident of pushing through any potential price increases.

After several years of under-investment, the European market is due to see a new 40 ktpa BOPET film line installed towards the latter stages of 2019. This is expected to produce mainly thin commodity film.

The region was due to see a second 36 ktpa line in 2019, however the investment is no longer going ahead in Europe. While the new line will provide some supply relief for buyers, it will not reach the levels previously thought. This means that imports will continue to play a significant role in meeting European demand in 2019.

On a global basis, the rate of new capacity due to be installed in the market over the next 5 years will not keep pace with the expected growth in demand, thereby adding to upward pressure on BOPET film prices.

5. More thought to be given to environmental credentials of BOPET film

Environmental issues are likely to play more of a part for BOPET film suppliers in 2019 and beyond.

New legislation in Germany is to come into effect at the start of 2019, which will set a new set of packaging goals and restrictions to increase recycling targets across the board. Pressure from the EU to regulate packaging use in order to be more environmentally aware, minimize waste and improve recyclability is expected to increase.

The possible shift from laminates to monolayers for flexible packaging is seen as an increasingly critical issue by some BOPET film producers in terms of environmental credentials. There is a feeling that the BOPET film industry needs to have a clearer and louder voice in order to influence and assist decision-makers on these matters.