Where do polyolefins and olefins fit into the 2019 petrochemicals story?

5 key petrochemicals issues to focus on in 2019

In the 1967 film 'The Graduate', a bold prediction was made: “There is a great future in plastics." Since then, global consumption of plastics and new applications have been the main demand drivers of the petrochemical industry.

Even in 2018, plastics continued to take centre stage for the world’s petrochemical industry. Global demand growth rates exceeded global GDP growth, we saw double-digit demand growth rates in China despite a waste import ban, there was another year of peak profitability across most regional petrochemical-to-plastic value chains and consumers and governments declared war on single-use plastics. Additionally, despite engaging in a trade war with China, the U.S. began implementing a large wave of export-oriented petrochemicals and plastics investments.

The dynamic market events of 2018 will be further enhanced by the following key themes concerning the petrochemical industry in 2019.

Transportation demand, via gasoline, diesel and other distillates, represents the majority of end-use applications for crude oil. As a result, most existing oil refineries are configured to maximise transportation fuels. 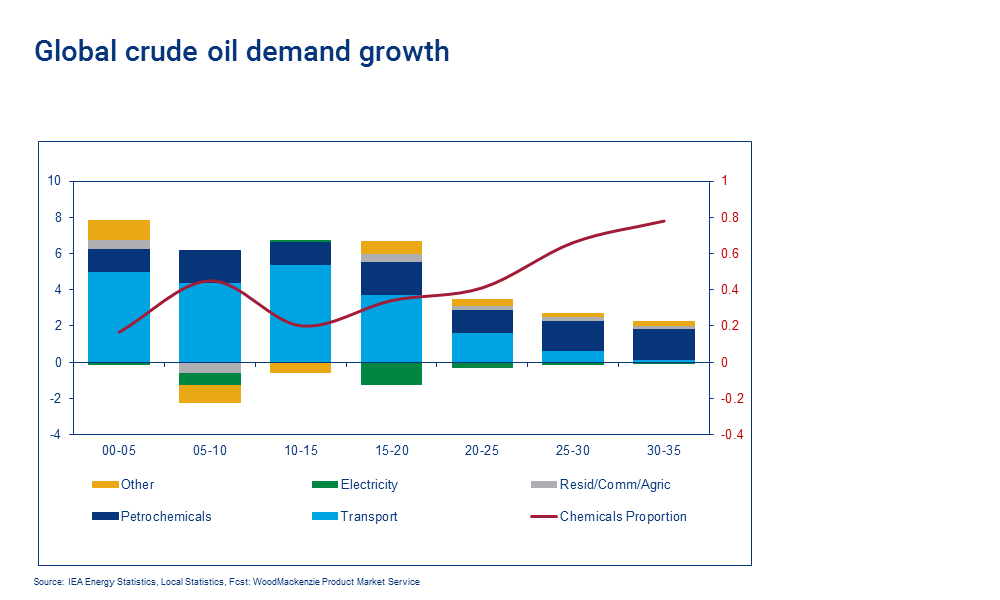 The majority of oil companies and analysts, including Wood Mackenzie, believe that transportation demand for crude oil will peak globally in the late-2020s due to improved internal combustion engine efficiency standards, increased use of electric vehicles, and consumer preferences. As a result, many oil production and refining companies are emphasising chemicals - particularly olefins and aromatics - as a key target area for future crude oil long-term demand growth.

Dedicated crude-oil-to-chemicals technologies are being developed by Saudi Aramco, Sabic and ExxonMobil. Many traditional oil refineries will consider retrofitting to maximise production of chemical feedstocks rather than transportation fuels. Other major strategic moves will take the form of mergers, acquisitions, and joint ventures to more tightly connect companies that have crude oil/refined product supply with chemical markets and demand e.g. Saudi Aramco becoming one of the 5 largest chemical companies after acquiring Sabic.

2. China's drive towards self-sufficiency for basic chemicals and polymers

China has traditionally been the world's largest importer of most petrochemical and plastic raw materials, which has driven its rapid growth in finished goods manufacturing over the past fifteen years. China is massively investing in propylene and primary derivatives to become self-sufficient in this value chain, just like they have already done for polystyrene and PVC chains.

China is currently only around 55% self-sufficient in the ethylene value chain and continues to be the largest importing country in the world for ethylene, polyethylene, ethylene glycol, and other ethylene derivatives. However, China will begin to measurably increase its self-sufficiency in the ethylene value chain through more domestic capacity in this sector beyond the traditionally state-controlled companies of Sinopec, Petrochina, and CNOOC by encouraging further private Chinese and Western investments. The majority of new refinery/paraxylene projects will be implemented by private Chinese companies. These crude-to-chemicals projects often include ethylene complexes as well. Several Chinese steam crackers will also be built by private companies based on imported ethane and/or LPG. 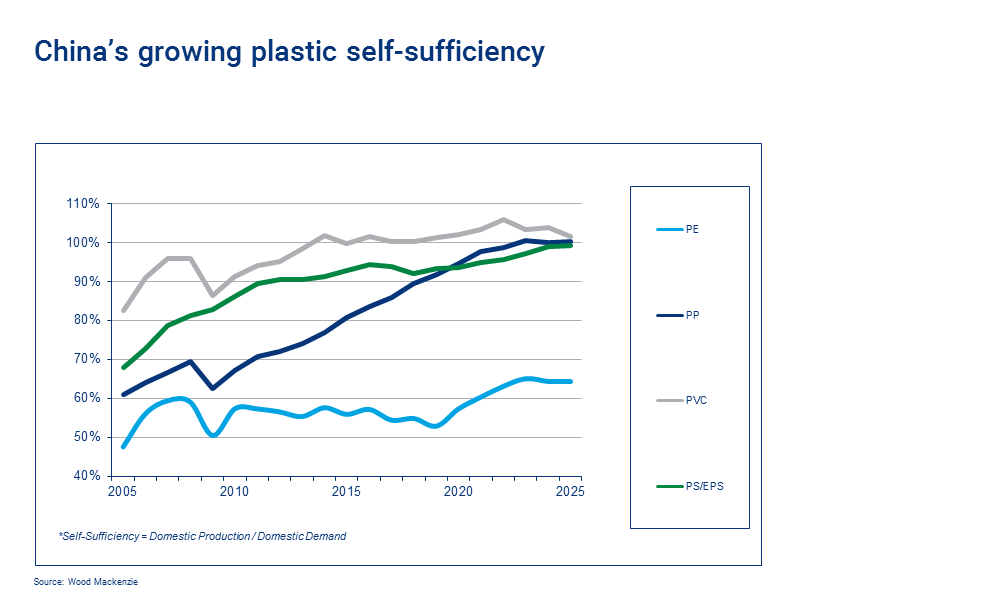 North America's shale gas developments have accelerated a huge wave of new ethane-based ethylene/PE/MEG export-oriented facilities starting up in the 2017-2019 period. A second wave will reach FID in 2019/2020, with commercial production expected in the first half of the 2020s.

However, North American ethane prices rose to unexpectedly high levels in 2018 due to inadequate infrastructure to bring ethane from shale gas fields to steam crackers, and a surge in demand from the first wave of new ethylene facilities. This recent spike in ethane prices will give pause to those considering a second wave of investments in North America. However, there is plenty of cost-advantaged ethane supply in North America to support a second wave of export-oriented ethylene and derivative facilities that will become available after further ethane midstream infrastructure investments are completed.

Significantly more NGL exports will also occur from the U.S., as evidenced by increased volumes of associated liquids anticipated from the Permian Basin and the construction of several new export terminals. Many of these new NGL exports will be targeted to feed China's propylene (new PDH units) and ethylene (new ethane and LPG crackers) assets.  However, as long as the current trade war continues between the U.S. and China, many new China chemical project decisions and government approvals based on imported ethane and propane will be delayed. 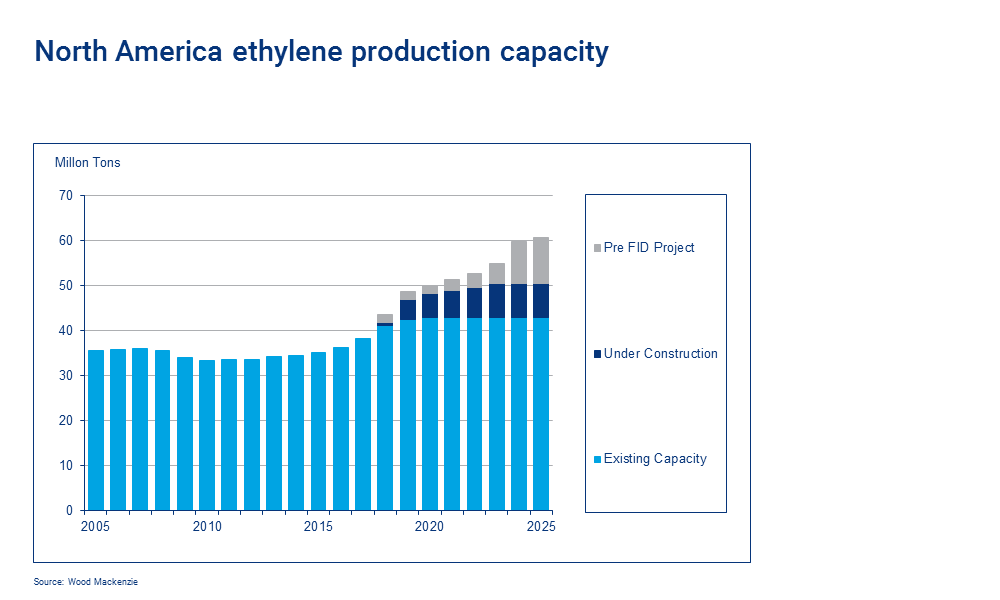 Improper waste disposal of plastic goods in the world's oceans has resulted in a backlash against single-use plastics from consumers, governments, and brand owners.

This backlash has taken the form of bans or levies on certain plastic products (e.g. straws and bags), initiatives to recycle more plastics (e.g. investments in recycling infrastructure system and development of chemical recycling technologies), and improvements to waste management systems, particularly in developing countries that often dispose of most waste including plastics directly into waterways.

These initiatives are being, and will continue to be, implemented by changes to consumer behavior, government legislation, industry trade association responses, and major brand owner requirements for the sustainability of their products and packaging.

Olefins and polyolefins represent the greatest share of existing plastic packaging. Plastic companies will, therefore, strive to make their products more recyclable, look for ways to incorporate recycled materials into their business and/or production processes, and to ultimately prepare for longer-term demand destruction of particular plastic single-use segments. 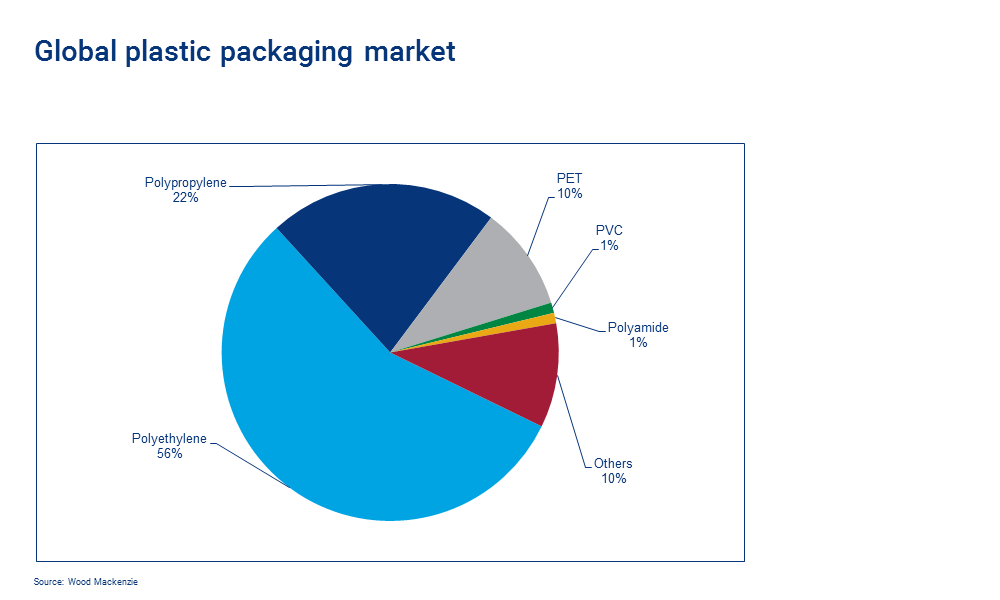 5. Consumption growth in the developing world

China is evolving from a manufacturing and export economy to an economy with a rapidly growing middle class. As such, we expect China's demand growth for petrochemicals and plastics to maintain a similar pace - as has been witnessed for the past decade. There are still rapidly growing manufacturing industries and/or middle classes in India, Southeast Asia (Vietnam, Indonesia, etc.) and Africa, which will also see rapid demand growth for petrochemicals for the next 20+ years. 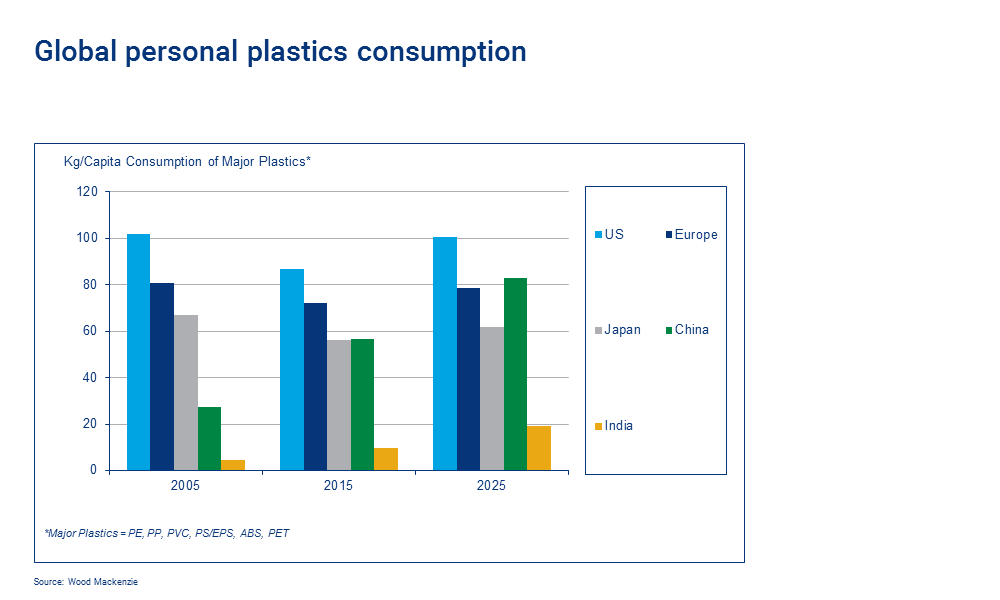 Opinion
The four changing priorities in the polyolefins industry

Discover how the industry is turning challenges into opportunities

And get your complimentary copy of the report

Despite the LME's efforts to prevent a repeat of March's short squeeze, it appears that one has been coming since October. This might run into the first quarter of 2023 and extend the current period of high prices. While stainless will remain nickel's main consumer, it will be the energy transition that takes nickel into the next structural deficit from 2027. Nickel in battery precursor demand will increase at a CAGR in excess of 13% over the next decade so that by 2032 this segment will take almost one third of total primary nickel demand.

On 15 July, the Oil and Gas Climate Imitative (OGCI) set a target to reduce the group’s overall Scope 1 and 2 emissions intensity from operated assets by 9% to 13% by 2025 compared to 2017 levels. Based on the existing portfolios of the members, we forecast the group average emissions intensity is likely to decline 6% by 2025, meaning more action will be needed to meet the target. Together with the individual corporate targets announced over the past six months, the new OGCI target is another positive step in demonstrating the commitment of oil and gas companies to climate change action. However, the path to a low-carbon future is long, and further, bolder steps will be needed to get there. This insight assesses the ambition of the target, including both how achievable it is based on existing portfolios and mitigation measures, and whether it goes far enough towards meeting Paris Agreement objectives.

Last week Repsol released an updated strategic plan that focuses on delivering value growth. Capital discipline in both upstream and downstream remains central, but a new roadmap aimed at thriving in the energy transition was also unveiled. We look at this plus the following stories: Results of Wood Mackenzie's State of the Upstream Industry survey. Brent holds steady as oil and gas stocks underperform. Petrobras and the Majors dominate Brazil's PSC Round 4. ExxonMobil is reportedly looking to sell out of Tanzania LNG. Devon sells EnLink interests and sweetens its buyback programme.

Corporate week in brief: ExxonMobil looks at crude to petrochems in China

ExxonMobil has signed a framework agreement for a new petrochemical facility in China that is expected to include facilities to directly convert crude oil to olefins. The plant could capitalise on our expectation of growing petrochemicals demand through next decade and also leverage expanding supply from ExxonMobil’s Permian tight oil portfolio. Read more on this, and the following stories: • OMV enters Southeast Asia in US$0.8 billion deal • Chesapeake amends credit facility • Total ups exposure to Guyana exploration • Q2 hedging roundup