Global upstream investment – the trends in 2020

Is the industry spending enough?

Chairman, Chief Analyst and author of The Edge

Chairman, Chief Analyst and author of The Edge

Upstream spend on development and exploration is a window into the industry’s affluence and outlook. A muted recovery has been underway since the collapse in investment levels after the 2014 fall in oil price.

What’s the forecast for spend in 2020, up or down? Which segments are growing and which are in decline? Will the recovery in conventional FID’s continue? How is capital discipline going to affect spend on tight oil and shale gas? And will E&Ps invest more in conventional exploration now full-cycle returns are more attractive?

Is the industry spending enough?

That’s the big question on our minds. Companies are still extremely cautious, with capital discipline the order of the day. Budgets are tightly controlled, though service sector costs are still low so there’s more bang for buck. Despite the fall in spend, supply of oil and gas has continued to surprise on the upside. Whether that holds true into the mid-2020s depends on whether Permian tight oil delivers the growth we expect.

Where are the opportunities?

Development outside the US L48 is robust, up around 4% to US$352 billion this year. We predict a healthy crop of conventional FIDs of around 40 projects; below the 2018 peak of 54, but up on last year and the second-highest since the downturn. These hold 34 billon boe of resource with total spend of US$220 billion, in line with the 2018 high-water mark. The average project size at over 800 million boe is also a bit higher.

Which segments are growing?

LNG is on a major growth spurt. The market is heavily oversupplied at present, but the industry needs to develop new LNG supply to meet growing demand. Last year saw a record 71 mmtpa of new capacity sanctioned, including December’s go-ahead for Nigeria LNG Train 7. 2020 could match that number with big projects in Qatar, the US and Mozambique. Spend on upstream LNG projects in 2020 will be up 50% on 2019 to over US$30 billion (excluding non-integrated plant spend). There’s a concern about cost pressures after the squeeze early last decade, when new build was concentrated on Australia. This time, there’s a wider geographical spread and spare capacity in fabrication yards.

US unconventionals – spend will fall by more than 10% in 2020, with tight oil and shale gas both down. There’s still plenty of tight oil inventory with breakevens below US$50/bbl, mainly in the Permian. But investors have tired of years of negative cash flow and ‘jam tomorrow’. Many of the independents that dominate tight oil production are being forced to reduce spend and, instead of pursuing growth, deliver free cash flow and dividends. The Majors, led by ExxonMobil and Chevron, don’t have the same constraints and will increase spend.

The net effect is lower spend and lower average rig count. This will lead to monthly year-on-year tight oil production growth falling to virtually zero by the end of this year, albeit temporarily. It’s a far cry from the rampant growth of the last few years. With Henry Hub depressed, cash flow for unconventional gas players is also under pressure and spend will decline.

No, the opposite. We expect a drop of 15%, to around US$30 billion, meaning spend in 2020 will be just one-third of the US$93 billion 2014 peak. The continued drop in spend comes despite improved exploration economics – we expect full cycle returns of 12% to 15% in 2020, the fourth straight year of value creation.

Conventional exploration is inherently high risk and vulnerable when capital is constrained. Fewer companies are exploring, with smaller explorers struggling to raise risk capital. Another reason spend is declining in 2020 is that well commitments have fallen away. We aren’t yet seeing companies rein in exploration directly because of risks posed by the energy transition, though that will come. We reckon U$25 billion to US$30 billion may be the new normal for undisturbed global exploration spend for the next few years.

Will the current spike in oil price change anything?

Unlikely. The geopolitical tensions behind the January jump in Brent increase uncertainty and, if anything, weaken the case for discretionary investment. The industry has a reputation for short-termism but, in 2020, will be at pains to convince investors it won’t fall into the trap of loosening capital discipline. Any surplus cash flow generated by higher prices will most likely be returned to shareholders as buy-backs or used to pay down debt. 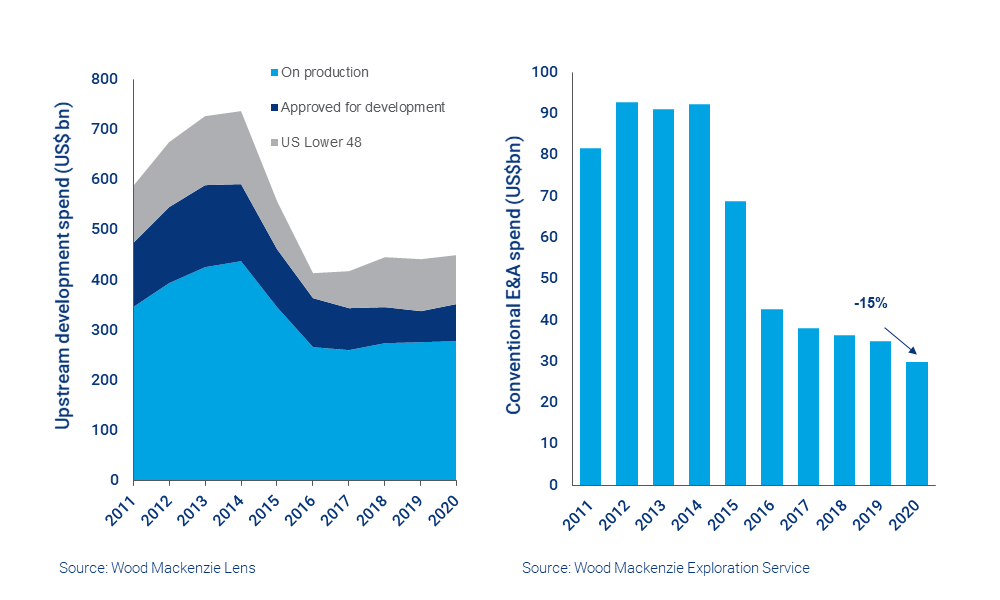 What does 2020 hold for the global upstream oil and gas industry?

Deepwater rising: The state of the global deepwater industry

The rising hurdles for investment in upstream