The result? An unprecedented great American oil pipeline build-out. The shale revolution has led to burgeoning pipeline takeaway access from the Permian basin. Last month, we discussed three reasons why the Permian’s future pipeline capacity won’t be quite enough as we move into the 2030s. We believe the region needs one more pipeline to meet growing export demand, which will leave the Gulf Coast in the largest volumes from Corpus Christi.

To be sure, most surplus crude barrels will flow directly to the Gulf Coast from the growing production regions. Additionally, we forecast about 1 million b/d of increased crude will flow into Cushing, the largest midcontinent oil-storage hub. Inbound Cushing flows are set to peak in 2027.

We estimate that vital Cushing-to-Gulf Coast oil pipeline capacity will come online in the next decade with additions from expansions on the Seaway, Marketlink and Diamond pipelines. These expansions, partnered with the Capline reversal and new-build Red Oak system, will bring total new capacity to 700 kb/d by 2027, according to our brand-new North America Crude Nodal Network.

The near-term build out of Cushing-to-Gulf Coast pipelines will bring forward a more balanced transportation supply and demand picture until 2023. After that time, signs of additional capacity need will emerge. This is why our base case includes an extra 400 kb/d of outbound Cushing capacity with FID taken in 2023, and start-up in 2025.

The price of WTI at Cushing is expected to narrow against coastal WTI prices and waterborne Brent benchmarks as the infrastructure build out continues through 2020. By the end of 2020, the Brent-WTI spread is assumed to reduce by half to $4.50/bbl. 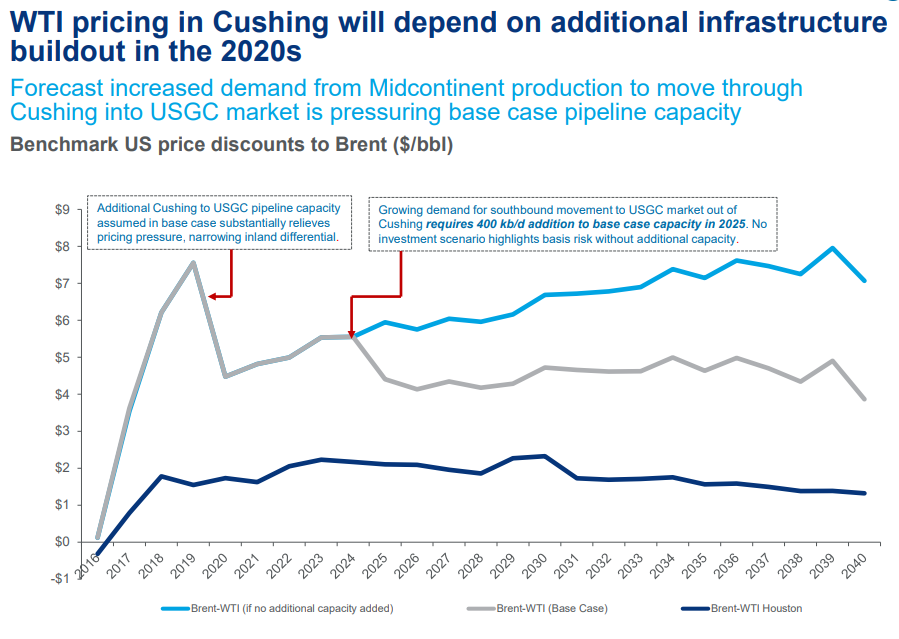 Without the assumed 400 kb/d addition we propose by the end of 2025, the WTI-Brent spread will creep back to $7-$8/bbl as demand for southbound transport ramps up through the 2020s.

This analysis and more is available in our North America Crude Markets long-term outlook. To get more of our insights, watch our webinar on the topic. Fill in the form on this page to view the webinar on demand.