The greening of BlackRock: What it means for energy

BlackRock is the world’s largest fund manager, with about $7 trillion of assets under management, and the consequences of its new position for global business and finance, and especially for the energy industry, will be profound.

In Saint Augustine’s Confessions, he famously remembers how he used to pray: “Grant me chastity and self-control, but please not yet.” Until now, BlackRock’s view on addressing climate change has been somewhat similar: it talked about the issue quite a lot, but seemed to be taking action much less often. In 2018, BlackRock voted in favour of just 10% of climate-related shareholder proposals at US companies where it held stakes, according to Ceres, a group that works with investors on environmental and social issues. Reuters found a similar low rate of support on key climate-related votes in 2019. Environmental groups identified BlackRock as an obstacle to action on climate change, targeting it specifically with a campaign called BlackRock’s Big Problem.

Now that is changing. BlackRock this week published two letters, one to clients and one to chief executives, pledging that the group would be taking steps “to place sustainability at the centre of our investment approach”, and focusing on climate risk in particular. Larry Fink, BlackRock’s chief executive, wrote in his letter to CEOs that he believed the world was “on the edge of a fundamental reshaping of finance” to address the climate threat. He added: “In the near future – and sooner than most anticipate – there will be a significant reallocation of capital” to address the climate threat.

BlackRock is the world’s largest fund manager, with about $7 trillion of assets under management, and the consequences of its new position for global business and finance, and especially for the energy industry, will be profound.

The key components of the strategy, spelled out in BlackRock’s letter to its clients, include:

BlackRock has also joined the Climate Action 100+ group of investors working together to put pressure on the world’s highest-emitting companies to take more action on climate change.

Its new position could quickly start to have an impact on the energy industry. Wholesale divestment is not on the cards, not least because many of the assets managed by BlackRock are in index tracker funds that will have to hold certain companies. In a very interesting half-hour interview on CNBC, Fink made clear that “we are not running away from all hydrocarbons, because we do believe they play a role”. He highlighted gas, in particular, as playing “a very large role in the energy transition”. However, BlackRock will have great influence over oil and gas companies, through engagement with company boards and through its votes on shareholder proposals.

In the past, BlackRock’s votes have often been important in helping companies defeat climate-related proposals. Last year there were 16 such proposals at US companies that were defeated, but would have passed if they had been supported by BlackRock and Vanguard, the second-largest asset manager, according to a study published last October by Harvard Law School. The companies that could have been affected by those two large investors voting the other way included Marathon Petroleum, NextEra, NRG Energy and ExxonMobil. BlackRock’s decision to back both the SASB and TCFD reporting standards, by voting against company boards that reject them, seems likely to mean that both will be adopted across the corporate world quite rapidly.

A ceasefire in the trade war

In characteristic style, President Donald Trump proclaimed that the “Phase One” trade agreement signed by the US and China on Wednesday was “the biggest deal anybody has ever seen”. It was not that, but it could still have some significant implications for energy.

A central component of the deal is China’s pledge that over the two years 2020-21, it will “ensure” that its purchases and imports from the US are $200 billion higher than in 2017. Of that $200 billion, $52.4 billion is supposed to come from energy commodities: oil, natural gas liquids, liquefied natural gas, and coal, in unspecified proportions.

For China to fulfil that commitment, it would have to quadruple its energy imports from the US, which were just $8.4 billion in 2017, according to US Census Bureau data. As this chart shows, about half of those were sales of crude oil, which grew very rapidly after restrictions were lifted at the end of 2015. 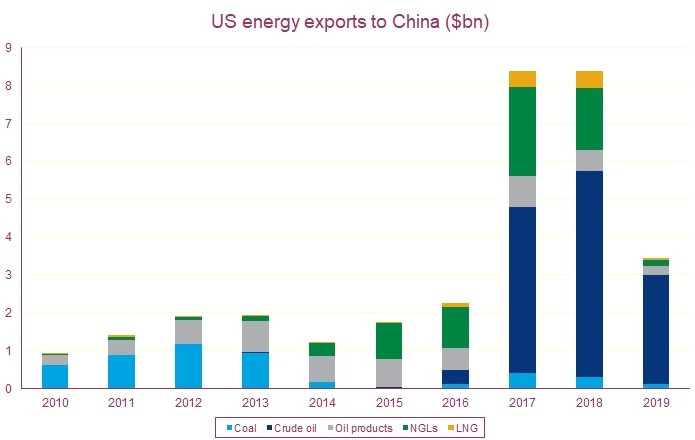 (The 2019 data are for January-November, but that will not make much difference to the picture.)

Given China’s huge and rapidly growing demand for energy, increased imports of US oil, gas and coal might look like one of the agreement’s more easily achievable pledges. However, Gavin Thompson, WoodMac’s vice-chair for the Asia-Pacific region, argues that it will still be “challenging” to achieve such a massive increase in trade. One significant problem is that China’s import duties of 5% for oil and 25% for LNG from the US are remaining in place for the time being, making those purchases unappealing for Chinese companies.

Oil may offer greater potential for increased sales. At current prices, China would need to buy about 1.1 million barrels per day more of US oil to meet fully its pledge of $52.4 billion additional energy imports above 2017 levels. China’s crude imports averaged 10.1 million barrels per day last year, up 9.5% from 2018, Reuters reported this week. So it would need to shift to sourcing an additional 10% or so of its imports from the US to be able to report success on at least one part of the Phase One agreement.

Even if the deal does lead to significant increases in Chinese purchases of US crude, however, it will probably not have much of an impact on the total amount of oil flowing out of the US. Crude that would have been exported anyway is likely to be diverted to China instead of to other markets in Asia and Europe.

Microsoft became the latest company to highlight its actions on addressing the threat of climate change, issuing a statement pledging that by 2030 it would be “carbon negative”: removing from the atmosphere more carbon than it and its suppliers emitted. Its plans for achieving that objective include a new $1 billion innovation fund, intended to help accelerate the development or technologies for reducing, capturing and removing carbon emissions. It will also “make carbon reduction an explicit aspect of our procurement processes for our supply chain”. Microsoft already imposes its own internal “carbon tax” on all its divisions at a rate of $15 per tonne of CO2 emitted, and from July of this year it plans to extend that charge to the emissions created by the suppliers to those divisions. Techniques for removing carbon dioxide from the air including planting more trees, bioenergy projects with carbon capture and storage, and direct air capture.

Siemens, meanwhile, has been under attack from climate change campaigners, who have been protesting about the company’s contract to provide signalling for the Adani Carmichael Mine coal project in Queensland, Australia. Joe Kaeser, Siemens’ CEO, wrote a blog post over the weekend defending the company’s decision to honour the contract. He had had “countless mails, social media engagements and personal meetings” over the issue, he wrote, and Siemens “fundamentally shares the goal of making fossil fuels redundant to our economies over time”. However, he added, it was clear that the project would go ahead even without Siemens’ signalling, and “there is practically no legally and economically responsible way to unwind the contract without neglecting fiduciary duties”. In response to the controversy over the project, Siemens is setting up a sustainability committee with external members, to increase the attention paid to environmental concerns at the company.

The German federal government and the country’s four coal-producing states have agreed details of their plan to phase out coal-fired power plants by 2038 at the latest, with a price tag of about €44 billion ($49 billion) in compensation to help the transition. However, the power company Uniper is planning to open a new coal-fired plant at Datteln in North-Rhine Westphalia this year, saying it will be more efficient and cleaner than the older plants it will replace.

Meanwhile, air quality concerns are forcing countries in Northeast Asia to tackle their reliance on coal.

EQT, the largest gas producer in the US, announced in a regulatory filing that it expected to take a charge of $1.4-$1.8 billion in its fourth quarter earnings, as a result of asset writedowns prompted by “depressed natural gas prices” and changes to its development strategy.

The “fracklog” of drilled but uncompleted shale wells in the US has fallen sharply.

Three-quarters of all the new generation capacity expected to be added to the US grid this year is wind and solar power. As renewable energy grows, gas is set to retain its position as the dominant fuel for power generation in the US, but it is expected to drop back a little over the next couple of years.

The US government is thinking about allowing LNG to be transported by train.

As the International Maritime Organization’s new rules on sulphur in shipping fuel have taken effect this month, the price of a rare grade of crude has jumped to almost $95 a barrel.

And finally: BBC Future has been promoting as one of its “best of 2019” a fascinating piece from last year about the Cold War race to drill the deepest hole on earth. Innovations developed in these sub-surface “expeditions” helped push back the technological frontier for what the oil and gas industry can do today.

Simon Flowers — What changed energy markets in the 2010s

Izabella Kaminska — Why Extinction Rebellion is wrong about BlackRock

Joseph Daniel — Coal is no longer a baseload resource, so why run plants all year?

“For those clients who want to be in hydrocarbon companies, that’s their job, and wishes, and we will work with them. But what we want to do is — through the lens of better information — we believe we’ll have the opportunity to invest in companies in that area that are better prepared.” — Larry Fink, chief executive of BlackRock, clarified the fund manager’s increased focus on sustainability and climate risk in an interview with CNBC. The new strategy did not mean divesting from all fossil fuels, he said, but he expected to achieve superior performance by investing in companies that were better prepared to face up to the challenges created by climate change.

This chart, published in a blog post from Microsoft’s president Brad Smith about its plan to become “carbon negative”, is very simple but also very important. It shows the very tight association between three things: energy consumption, carbon dioxide emissions, and gross domestic product, representing living standards. Smith makes the point that throughout history, increases in prosperity have been tightly connected to increases in energy use, and that is likely to continue to be the case in future. “If we’re going to continue to create more economic opportunity and prosperity, it likely will require even more energy use”, he writes. The big question is how far the world will be able to disconnect carbon emissions from that rising use of energy. 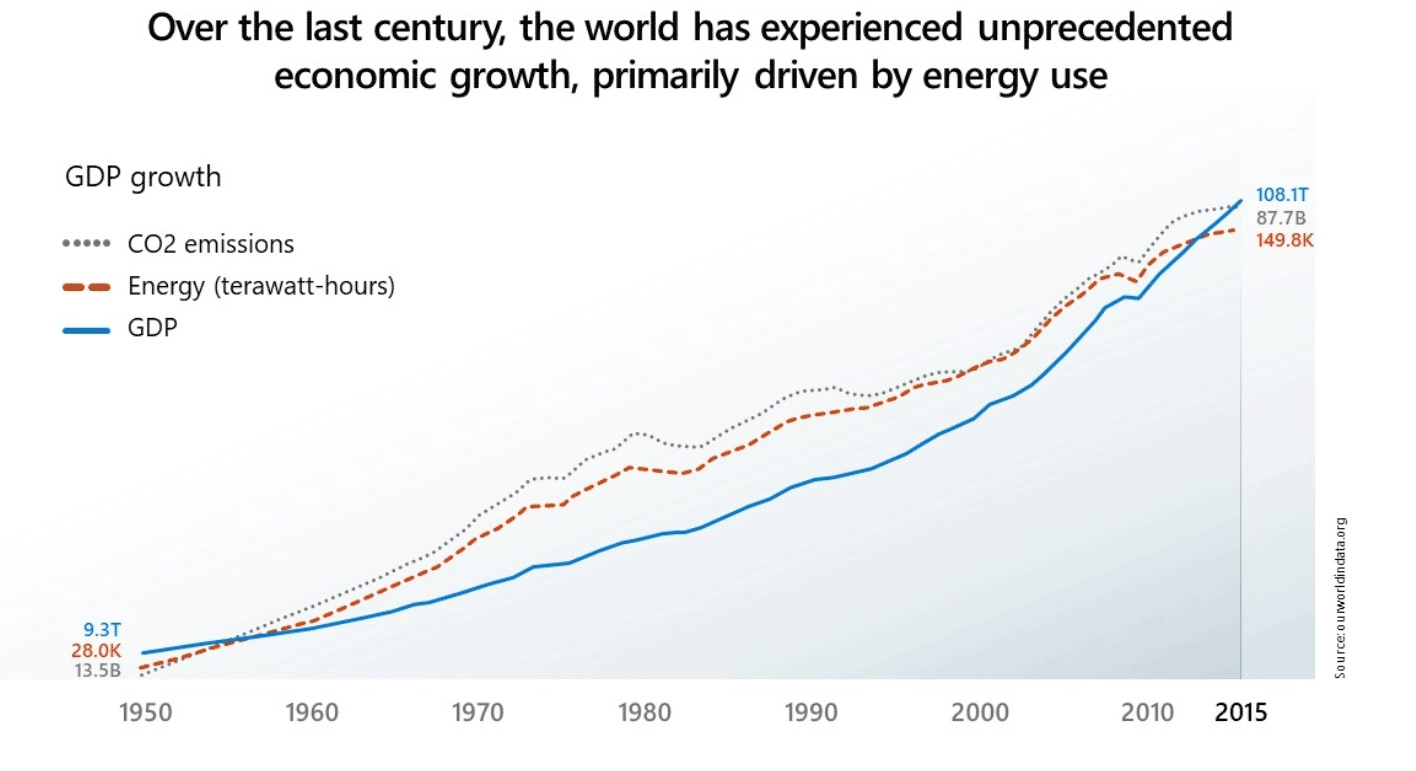 What the BP-Hilcorp deal means for Alaska