A timeline of major events in Ukraine-Russia gas relations

Principal Analyst with a focus on the European gas market and the development of alternative scenarios.

The gas transit and supply contracts between Russia and Ukraine expire at 10 am on 1 January 2020 (Moscow time) – the future of Ukraine transit remains the largest uncertainty for global gas markets in 2020. Crunch talks are underway as the contract expiry looms.

Get the latest on this developing story: Ukraine transit deal close but sanctions halt Nord Stream 2

We take this opportunity to reflect on 20 years of Russia-Ukraine gas relations.

Note: This timeline is not exhaustive, and excludes a number of smaller disputes involving price and volumes of gas supply and transit, ownership of Ukrainian pipelines, and a range of political stumbling blocks.

Can Europe cope if Russia shuts off Ukraine gas transit?

Visit store to buy this report

The 2004 pro-western ’Orange Revolution’ resulted in a pro-European Ukraine president and worsened Russia-Ukraine relationships. A dispute on supply and transit followed. With the parties unable to reach agreement on pricing terms, Russia cut off supplies on 1 January 2006. Ukraine allegedly continued to offtake gas from transit supplies for its own needs in the first few days of 2006. After only a few days, a new deal was reached involving an intermediary company (RosUkrEnergo) and supplies to Ukraine were restored.

Disagreements over the amount of accumulated debt by Ukraine led to Gazprom briefly halving direct supplies to Ukraine in early March.

Following prolonged negotiations over price and Ukraine’s outstanding debt, Russia cut off direct supplies to Ukraine. The transit continued, although the sides clashed over the offtake of gas by Ukraine with conflicting claims made by both sides. Naftogaz claimed the offtake was for the purposes of fuel for the transit, while Gazprom insisted that the volumes were taken illegally for domestic use.

Following pressure from the EU, the new 10-year gas sales and transit contracts were signed and flows were restored. The contracts were later disputed in the Stockholm Court of Arbitration (see details below).

The 2013/14 anti-corruption pro-western rallies in Ukraine led to the ousting of a pro-Russian then-president Viktor Yanukovych and the creation of a new pro-western government. Tensions between the countries heightened as Russia annexed the Ukrainian region of Crimea and began a military involvement in the east of Ukraine. Throughout this time, Gazprom unilaterally removed a number of discounts. As a result, the price charged by Gazprom changed by 80% – from US$269 per thousand cubic metres in December 2013 to US$486 per thousand cubic metres in April 2014.

During this time, supplies to Ukraine continued, but the sides could not agree on a price. On 16 June 2014, both Gazprom and Naftogaz filed lawsuits at the Stockholm Court of Arbitration regarding the supply agreement. These were later followed by lawsuits regarding the transit agreement. Also on 16 June 2014, Gazprom requested to switch to supplies based on prepayment. But as Naftogaz disagreed with the price charged, and amid heightened political tensions, supplies to Ukraine eventually stopped.

The first "winter package" was agreed with the support of the European Commission. The package enabled direct gas supplies from Russia to Ukraine on a pre-payment basis without the ToP clause until March 2015. Prices were set up in line with the neighbouring EU countries. The Ukrainian side committed to ensuring uninterrupted transit to Europe. The package was later extended until July 2015.

Having established sufficient reverse flows from the EU, Ukraine stopped buying gas from Gazprom directly, and has not bought it since (as of December 2019).

May, December 2017/ February 2018 – Arbitration ruling on supply and transit

The Stockholm Court of Arbitration issued rulings on the 2009 supply and transit contracts (see details in the infographic below). Gazprom did not recognise the outcome of the rulings and attempted to appeal. 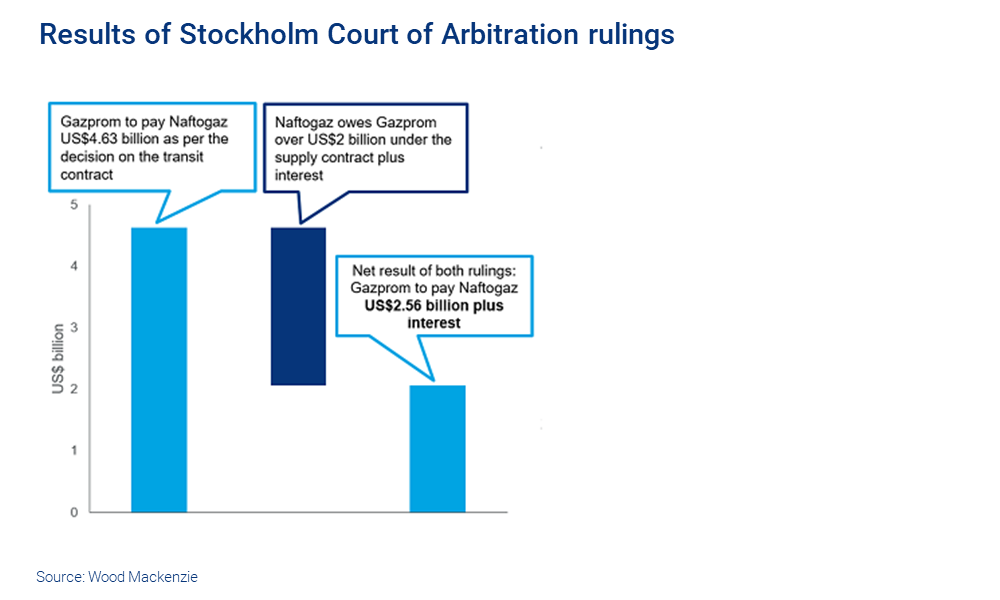 2 March 2018 – Request for termination of supply and transit contracts

Gazprom announced that it would seek to end its contracts with Naftogaz, as the Russian side did not recognise the Stockholm Court of Arbitration rulings on the contracts. However, the termination process is likely to take a few years, while the contracts expire on 31 December 2019.

Naftogaz filed another lawsuit at the Stockholm Court of Arbitration aimed at revising transport tariffs under the existing transit contract for the period between 13 March 2018 (date when Naftogaz notified Gazprom about the lawsuit) and end-2019 (expiration of the contract). Naftogaz claims that a revision needs to bring the tariff in line with the European principles of tariff formation. The decision is scheduled for 2021, and the overall claim amounts to over US$12 billion consisting of the US$11.8 billion main tariff revision claim, additional compensations and interest.

Ukraine remains the major transit route for Russian gas into Europe – over 76 billion cubic metres will be transported via Ukraine this year. The implications of a disruption are significant.

Murray is responsible for Wood Mackenzie’s Global coverage across the hydrogen value chain.

What does this mean for Naftogaz and Gazprom as they enter the final rounds of talks?

Gas transit and supply contracts expire in the morning of 1 January 2020, and negotiations over the future of the transit continue. Our team of gas experts has analysed each side's negotiating positions as they enter the final rounds of talks. Contact us for an in-depth discussion of negotiating positions and likely outcomes.

What could 2023 deliver in energy? | Podcast